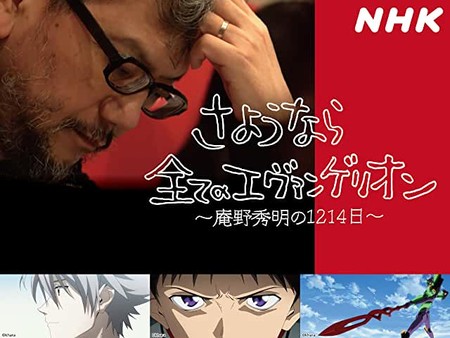 Two of Japan’s top creators come together for a special fireside chat. Hideaki Anno, creator and director of the Evangelion series, and Hitoshi Matsumoto, producer of Documental and FREEZE, sit down to discuss their respective creative philosophy and approaches, the spread of their work abroad, their future creative endeavors, and more.

Evangelion is coming to an end. NHK spent 4 years with exclusive access to Hideaki Anno, documenting his creative process behind the final Evangelion: 3.0+1.01: Thrice Upon A Time. For the first time, the camera is allowed inside Anno’s studio. The documentary attempts to capture why master filmmaker Hayao Miyazaki (STUDIO GHIBLI) describes him as one who sheds blood for his films.

Sayonara Subete no Evangelion ~Anno Hideaki no 1214-Nichi~ (literally, Good Bye, All of Evangelion: Hideaki Anno‘s 1,214 Days) is the extended version of NHK‘s Professional: Shigoto no Ryūgi: Anno Hideaki Special documentary on director Hideaki Anno‘s life during the last Evangelion film’s production. Amazon Prime Video in Japan began streaming this extended version earlier this month. In Japan, the documentary is available in Japanese with English subtitles, although the subtitles are apparently missing for the first two minutes.

Amazon Prime Video is also streaming the Evangelion: 1.11 You Are (Not) Alone, Evangelion: 2.22 You Can (Not) Advance, and Evangelion: 3.33 You Can (Not) Redo films in over 240 countries and territories, including Japan. These versions are the adjusted versions of the first three Rebuild of Evangelion films after their original theatrical release. Funimation has released these new versions on home video with its own unique dubs.