Ladd was instrumental in introducing anime to N. America 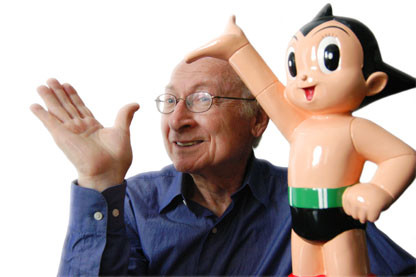 American television and film writer and producer, and North American anime pioneer Fred Ladd (Fred Laderman) passed away on August 3. He was 94.

Ladd was instrumental in introducing anime to North America. In 1963, Ladd re-edited and re-dubbed the Tetsuwan Atom anime, based on Osamu Tezuka‘s manga, into Astro Boy. This was the first anime to air in North America. He also produced the Gigantor (Iron Man 28) and Kimba the White Lion (Jungle Emperor Leo) anime in the 1960s. Ladd was a creative consultant for DiC Entertainment‘s original English dub of Sailor Moon.

Fred Ladd was a true pioneer. His early work with Dr. Tezuka brought anime to North America, as well as popularized a budding industry in Japan. I think you could safely say, without his efforts, we wouldn’t have anime as we do today.

It was an honor to work with him to restore and release these classic works over the years, and I know that it brought him great happiness to see them continue to be enjoyed by new generations of fans.

Ladd was born in Toledo, Ohio in 1927. He graduated from Ohio State University in 1949 with degrees in radio and speech. Prior to his work on Astro Boy, Ladd re-edited and redubbed European cartoons into English. Ladd worked as a writer on animated shows including The Incredible Hulk, MASK, and Ghostbusters. He also wrote a book with Harvey Deneroff titled Astro Boy and Anime Come to the Americas: An Insider’s View of the Birth of a Pop Culture Phenomenon.