Set is available for pre-order, pre-order copies will ship from approximately December 6 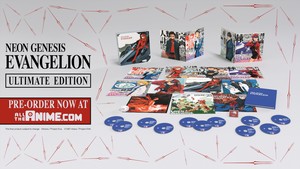 The Ultimate Edition release will also have 5,000 copies (one copy per customer) available in North America exclusively through the GKIDS Store for US$275. The set is currently sold out as of the time of writing.

The set will contain the 26-episode Neon Genesis Evangelion television series and the films Evangelion: Death (True)2 and The End of Evangelion.

The set is limited to 1,500 copies for the UK and Ireland, and will be sold exclusively through the All The Anime Store. The Blu-rays will reproduce the series in 1080p HD.

This release will not include the song “Fly Me to the Moon.”

It will also include the following extras:

Episode 7 - How a Realist Hero Rebuilt the Kingdom