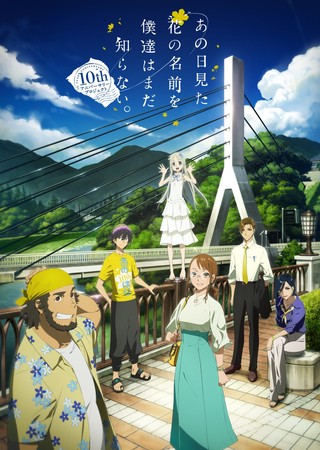 Original scriptwriter for the anime Mari Okada is writing the script for the stage reading. The event will take place on August 28, and the voice cast will appear in person at the anime’s real-life setting of Chichibu in Saitama.

The event is titled “ANOHANA 10 YEARS AFTER Fes.,” a deliberate callback to the “ANOHANA Fes.” that was held in Chichibu in September 2011.

The 10th anniversary project was first announced in March. Character designer and chief animation director Masayoshi Tanaka drew an image (pictured at right) of the main characters 10 years later to celebrate the project.

The television anime premiered in April 2011, and follows childhood friends who try to reconnect in high school, after drifting apart due to tragedy five years earlier. The series inspired a manga, a 2013 film sequel, and a 2015 live-action special.

Aniplex of America released its English dub of the anime series in a Blu-ray Disc box set in October 2017. The dub began exclusively streaming on Verizon’s go90 service that same month. Netflix began streaming the series with the English dub and subtitles in June 2019.

NIS America licensed and released the television anime in 2012 and again in 2013. Aniplex of America partnered with Eleven Arts to screen the film in theaters in the United States, and then released the film on Blu-ray Disc and DVD. Crunchyroll streamed the anime in 2012 and also streamed the live-action special. Crunchyroll began streaming the dub in January 2020. Funimation began streaming the series in August 2020.

Episode 7 - The Case Study of Vanitas