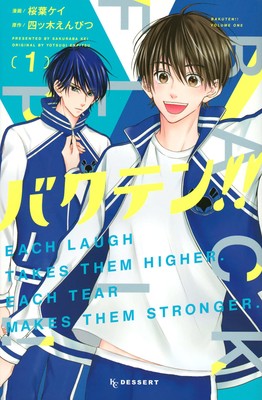 The October issue of Kodansha‘s Dessert magazine revealed on Tuesday that Kei Sakuraba’s manga adaptation of the Backflip!! (Bakuten!!) original television anime will end in the magazine’s next issue on September 24.

The manga launched in Dessert on January 22, and Kodansha published the manga’s first compiled book volume on June 11.

The anime is set in Miyagi prefecture’s Iwanuma city, and centers on a high school rhythmic gymnastics team. The anime follows Shōtarō Futaba, who is fascinated by gymnastics after seeing it in his third year of middle school, and joins the rhythmic gymnastics team of his new high school Sōshūkan High School, nicknamed “Ao High.” He makes a friend with his schoolmate Ryōya Misato, who earned fame as a gymnast during middle school.

The show premiered on Fuji TV‘s Noitamina programming block on April 8. Crunchyroll streamed the anime as it aired in Japan. The project will have an anime film.

The anime, which is set in Miyagi prefecture, is one of three anime projects part of the larger “Zutto Ōen Project 2011 + 10…” initiative aimed at promoting Miyagi, Iwate, and Fukushima (the other two anime projects are Misaki no Mayoiga and Hula Fulla Dance). The “Zutto Ōen Project 2011 + 10…” is in remembrance of the 2011 Tōhoku earthquake and tsunami 10 years ago.