Anime will be 1st full-length series episode on Roblox 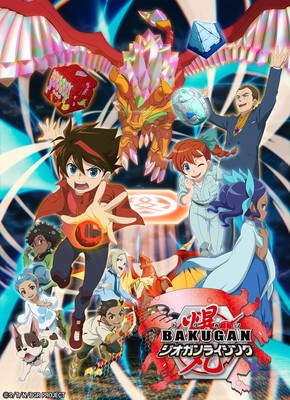 Spin Master announced on Wednesday that the second part of the Bakugan: Geogan Rising anime will begin streaming within the Bakugan hub on the Roblox online platform on September 8 and on Netflix on September 15. According to the company, this will be the first franchise to premiere a full-length series episode on Roblox.hAwkkx877k

Bakugan: Geogan Rising sees hero Dragonoid return as the Awesome Brawlers remain in a deep slumber, healing from the last time they had to save the world. This time, the gang will face adventures with a new set of Bakugan characters including Geogan, a Bakugan-like creature fused with elements of crystals and forming a new geometric form. Not only do Geogans look different than their Bakugan counterparts, but they are exceptionally strong and built to brawl. It’s not long before the Awesome Brawlers turn this group of misfit Bakugan into loyal partners, and Geogan have arrived on the scene, ready to prove their worth and dominate in the Bakugan battle arena.

Bakugan: Geogan Rising is the third season of the Bakugan Battle Planet anime, and it premiered on the Canadian television channel Teletoon in January. The show has 52 11-minute episodes. The anime premiered in Japan in April. Netflix added the series on April 15.

The first Bakugan Battle Planet season premiered in the United States on Cartoon Network and in Canada on Teletoon in December 2018. The anime then premiered in Japan on TV Tokyo and its affiliates in April 2019. The first season has 100 11-minute episodes.

The Bakugan franchise is based on Spin Master and Sega Toys‘ combination of metal cards and marble-like magnetic toys that automatically transform into figures during gameplay. The franchise has been a bestseller in North America.