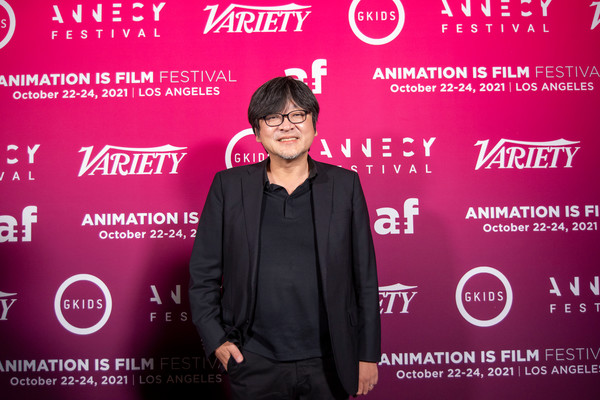 Summer and fall have been busy seasons for Mamoru Hosoda after the release of his newest film, BELLE. After screening the movie at New York Film Festival less than a month before, director Hosoda spent the entirety of this past weekend talking about BELLE during its West Coast release at the Animation is Film Festival in Hollywood. Nearly three years after the AiFF premiere of his last award-winning film, Mirai, Hosoda returned to greet the audience to premiere his movie with an in-person Q&A, which he was not able to do for NYFF.

Given the COVID-19 restrictions both in the U.S. and Japan, it’s no short of a miracle that he was able to attend in person. Hosoda mentioned he was nervous in anticipation of the audience reactions, but he was humbled as he heard the applause. Post-Mirai, Hosoda hinted in his 2019 IGN interview that his next work would focus on character growth and learn from their experience, and he delivered on that promise.

BELLE focuses on Suzu, a shy and freckled teenager, whose childhood tragedy prevents her from expressing herself either through her relationships or through art. She is unable to connect with others at school and has difficulty singing or songwriting despite it once being her passion. But through Belle, her digital persona in the online universe “U,” she slowly regains her confidence and attracts fans who support her talent. One day, she meets another user, known as Ryu or Beast, and grows continually concerned over the bruises and injuries on his back. The movie takes inspiration from the 18th century fairy tale, the 1946 black and white film, and Disney’s 1991 animated feature.

This past weekend, ANN spoke with Hosoda through his translator, Mikey McNamara, on the red carpet at the festival to talk more about BELLE. In addition to the red-carpet interview, the coverage below includes highlights from the Q&A after the screening of BELLE. Please note, these questions and answers contain spoilers for the movie.

Your movies often involve technology, social connections, and human compassion for strangers. What drew you to make that the focus of Suzu’s story?

Throughout your other movies, love and family are common themes. BELLE contrasts different kinds of love, such as love from family and community in both the real world and the virtual world. Considering BELLE‘s development occurred during the shutdowns in 2020, how did that impact your development on the story?

I recall when I was drawing the storyboards, that’s when we went into lockdown and I was hidden in my room churning out storyboards by myself. But in spite of that, there was an interesting connection that was happening between me and different creators around the world. Through the internet, we were able to interact with and communicate with collaborators who were going through the same thing. There was an interesting parallel between the two; how I was working alone in my space, but how I was also connected and able to produce this movie together with amazing talent around the world.

BELLE doesn’t shy away from the reality of strangers on the internet, in which it’s hard to distinguish between friend or foe. One of the focal points within the movie is the scary ability to directly see into someone’s home life. How did you decide to include that as part of the story?

It’s easy to fall into the trap of assuming everyone on the internet is good or bad. I think by and large there’s negative connotations or implications about the intentions of an internet stranger. At the same time, there’s a lot of positivity by meeting people that bring out the best talent within each other. When I was creating BELLE, I wanted to put the spotlight on that more positive aspect of what the internet can do and how it can open all this talent in the world.

Hiroka Betsuyaku is Suzu’s best friend and is very representative of how many young people can be very cynical. Why was it important to have her, as well as Luka, in Suzu’s circle of friends?

Indeed, there are three different women in BELLE: Hiro, Luka, and Suzu. Hiro is a realist and sees the world very differently and Luka is the pretty girl. Suzu, who on the exterior might not seem like much, has an amazing talent and amazing character named Belle on the inside. The three balance each other out in how they express different aspects in we, ourselves, are.

Takeru Satoh, who’s known for his role as Kenshin and Ryotaro Nogami in Kamen Rider, plays the Beast. What made him the best person to voice the Beast?

If you ever have the opportunity to meet Takeru Satoh, he’s an amazing person in real life. He also has such a wide range of what he can do when it comes to acting. Almost immediately I went to him and asked him to play the role. During the making of the film, he was able to pull out and act as characters in many different age ranges. So, he was able to use that talent to bring Beast onto the screen.

During the Q&A after the BELLE screening, director Hosoda answered questions from the audience and discussed the world of film more in depth.

Tell us where the idea of “U” came from and how that relates to what we see in Digimon, Summer Wars, and your other movies.

I’ve been making movies on the internet for about 20 years now. I think the wide adoption of it was only about 25 years ago. I think I’m the only director who has been depicting the internet in various forms for this long. As the history of the internet is not that long, and in the beginning, it was a much more hopeful space where the younger generation can spread their wings. In reality, it’s become this space where we project our own realities and a space where everyone exists.

As the internet has evolved, it has become a second reality where we’ve all brought our problems there. In a way, there’s a lot of toxicity that exists, especially in Japan. Because of that, in the world of “U” I skewed more towards a metropolis visual that doesn’t have an up or down or left or right. I think that’s more representative of how the internet has shifted over time.

In this world, there are concert arenas and battle domes in the film.

I would argue that we are much closer to the world like “U” than you may be thinking. But in reality, we are existing in these two worlds. Because we don’t have enough room it feels almost cramped in just one reality. This internet world has become a projection and second reality where we’re able to spread our wings a little bit more.

Even in reality reinvented, we see the same problems exist. Bullying, popularity contests, and self esteem issues. That almost seems like this is visualizing where the internet is headed next. Creating virtual versions of ourselves can be just as fragile as us in the real world.

As people, I think we have many more faces than meets the eye. When we exist in a single reality, that only allows us to show one face that we have. Take a girl like Suzu in a classroom, she may only show only one aspect of herself. In the world of “U,” having more realities allows her to show more than one side of herself.

How does “U” design Belle for Suzu?

The character design itself was by the legendary character designer Jin Kim. To your earlier point about the avatar being a projection, in many ways the internet has the ability to pull out another aspect of yourself that you may not realize. While you’re looking suave sitting here, perhaps on the internet there’s another version of yourself you may not know about. It’s like tapping into that subconscious and drawing that out.

After the initial, broader questions for the film, the speaker asked for the audience to focus on questions specifically from the movie. An audience member asked why the scene (where Kei’s abusive father is about to hit Suzu) doesn’t contain any dialogue outside of the father’s agitated yelling. What Hosoda wanted to convey was Suzu’s strength as there are other ways of displaying strength. By going into the other reality of “U” as Belle, she gained confidence that she brought back to the real world. More importantly, Suzu’s ability to hold her ground without resorting to anything physical or violent, shows the strength of her soul. In that depiction, it’s a display of both strength and beauty.

The Q&A speaker commented how recently animation (of all kinds) began portraying females outside of the princess imagery, but Hosoda’s filmography contains females who have been strong in different ways. He commented that it’s easy to fall into the trap of measuring yourself to someone else’s set of values. Perhaps one reason we go on the internet is to find a different version of ourselves that can feed back to us in the real world. Referring back to the original French version of Beauty and the Beast, it contained values from the 18th century with a male dominated perspective. Beauty can come in many different forms and it’s that cycle of Suzu and Belle feeding back to each other that updates that perspective. What drew him to the story of Beauty and Beast was the shift in societal values and what defines beauty from nearly 300 years ago to how it is defined now.

One excited audience member said that the film was the best thing he’s seen in two years. His question to Hosoda was why he decided to include musical elements. He answered that there’s something freeing about expressing thoughts through song, especially since Suzu is very repressed. However, he didn’t want the sole focus to be on pop songs. Hosoda admitted that in contrast to the American musical pipeline—where lyrics and music come before the animation—the BELLE composers chose the music after the storyboards and roughs were finished.

When asked about how the AiFF audience reactions stood out compared to the other film festivals, Hosoda said there’s a different energy here than in the other film festivals where BELLE was screened alongside live-action movies. Closing off the Q&A section was a discussion on the various character designs in the world of “U” as well as the team who designed all of them. Hosoda confessed that there were about 20 different designers, but that team wasn’t enough. In the end, they had engineers make an avatar generator which would render out different designs. Hosoda said, if you look in the crowd, you won’t find the same avatar twice.

The Case Study of Vanitas Anime Gets Stage Play - News

Episode 4 - AMAIM Warrior at the Borderline