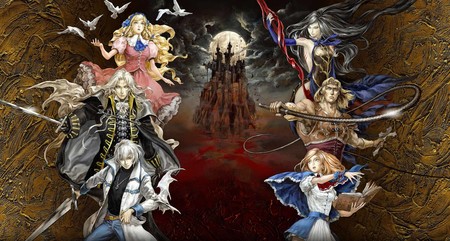 The side-scrolling action game will feature 60 levels with daily and weekly missions. Players can begin the game as Alucard and unlock characters such as Simon Belmont, Charlotte, Shanoa, and Maria through gameplay. Konami plans to add more characters to the game in the future.

The game launched for iOS and Android devices in Canada in September 2019, and ended service in September 2020. There was a closed beta in Japan in 2018.

The game allows solo play but also allows cooperative play between up to four players.

The game’s story is set in a future where Dracula seems to have been completely destroyed, and peace is almost upon the land. But Genya Arikado receives a letter that tells of an end to this new peace. It reads, “The Grimoire is loose. Dracula will be resurrected.” In order to find out the meaning to these words, Genya sets out to meet the letter’s sender. The story focuses on Genya Arikado and his assistant Lucy, but familiar Castlevania characters such as Alucard, Simon, Charlotte, Shanoa, Maria, and Soma Cruz also make appearances.