The grand prize winner who took home 100,000 yen and a standing offer to have their work distributed by CoV-Navi, an organization run by doctors and public health specialists with the aim of promoting an accurate understanding of the new corona vaccine.

In the midst of the pandemic, COVID-19 information service CoV-Navi and advertising manga production service Manga Tari Co. teamed up for the Corona Manga Grand Prix awards. There was a total of nine winners, including the grand prize winner who took home 100,000 yen (US$900) and a standing offer to have their work distributed by CoV-Navi. The winners will be published in multiple magazines including Daily SPA! and Women’s SPA!.

The grand prize went to 15-san for her work Shōgeki no Shinjitsu! Manga de Wakaru! Shingata Coronavirus Vaccine no Shōtai (lit: The Shocking Truth! Understand with Manga! The Identity of the Vaccine for the New Coronavirus). 15-san commented that she was driven to make the manga as a way to do something that could help protect her son given the current environment. She also wanted to create something readers could enjoy and wouldn’t leave them feeling confused, scared, anxious, or scolded. 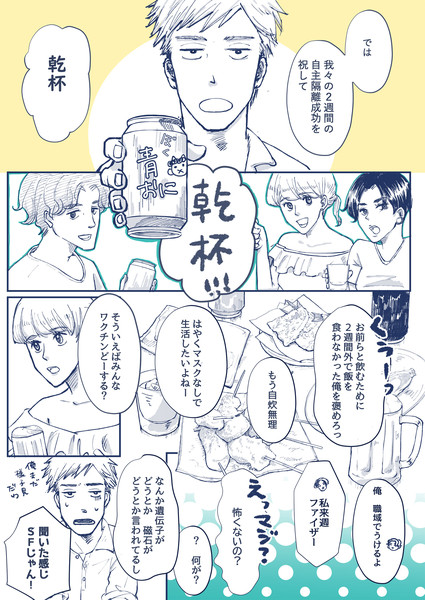 The project tasked artists with creating an educational manga to explain the COVID-19 vaccines. CoV-Navi provided an information video starring a medical doctor to explain the vaccines to help artists’ understanding. In the video, the doctor explains how the new COVID-19 vaccines work, while also touching on how life has changed during the pandemic. Organizers received 99 entries from June 30 until the contest ended on August 7.

CoV-Navi is run by doctors and public health specialists with the aim of promoting an accurate understanding of the new corona vaccine.

Manga artists have turned to their craft to help tell stories about life during COVID-19. Cells at Work! creator Akane Shimizu shared an image in 2020 to remind individuals to quarantine, wash their hands, and wear a mask. The Ministry of Health, Labour and Welfare of Japan later shared Shimizu’s chapters regarding the virus and vaccine for free in April. The original manga ended on January 26 with the “new coronavirus disease (COVID-19)” chapter as its final chapter. March comes in like a lion creator Chica Umino created an informational image about handwashing in April 2020.