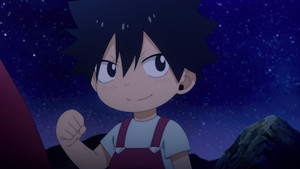 Hiro Mashima‘s Fairy Tail is a series that has had a long-standing impact on my life. It is far from perfect and I could talk about its shortcomings for hours on end with friends, but at its best, the series felt like a great encapsulation of the pure, wacky, open-ended whimsy that I think helped reignite my love for simple, open fantasy stories. Now that the main series is over (well, mostly over; The Fairy Tail: 100 Years Quest manga is still going strong), how would Mashima follow up on his previous success? Well there’s always the option to just up the scale all the way to 11! If Fairy Tail relished itself as a simple fantasy in a magical kingdom, then it seems like Eden Zero wants to present itself as a grand space odyssey where the galaxy is an endless ocean and every planet is a new island to discover.

Shiki is our new, wide-eyed ball of energy who is defined by those trademark, albeit cliche thrusts for adventure and friendship that we should come to expect, tempered only by Rebecca’s slightly more experienced worldview. The motivations of our characters are simple and easy to understand, with Shiki’s also getting surprisingly dark when you consider the long-term psychological effects growing up without human contact would have on someone. Granted, the way that everything is framed doesn’t feel as horrifying as I remember them feeling from the original source material. The intended emotions can still hit with Rebecca’s and her cat’s backstory towards the end of episode 2 being particularly tragic. However, it felt like a bit of that dark edge was lost amongst the cleanness of the anime adaptation. Though with that tradeoff comes what seems to be the best-looking adaptation of Mashima’s work that we’ve seen thus far, with bright colors, crunchy sound design, and brief yet slick animation cuts that really adds a sense of weight to some of the action. It’s hard to say if the rest of the series will maintain this consistent level of quality, but from a pure presentation standpoint, these two episodes are a step up from both seasons of Fairy Tail in almost every way. Shiki’s gravity powers seem surprisingly unique, being shown off with fun, expressive camera angles, and a galaxy begging to be explored in the background feels like the perfect setup for Mashima to wow us with even more crazy ideas.

However, just because the potential is there doesn’t mean that the setup here was handled flawlessly. While Shiki’s backstory works and the inciting incident for starting him on the path to being an adventurer with Rebecca led to a touching goodbye that was surprisingly effective by the end of episode 1, the timing of it all was a little too neat. If Rebecca hadn’t met Shiki at the exact moment when she did, things clearly wouldn’t have worked out as intended, and the fact that she almost seemed like the perfect person to have found him given her own relationship with robots can be a little distracting. The comedy around Shiki and Rebecca feels good and the two have nice chemistry, though it’s nothing we haven’t seen before and can at times feel a little too close to the dynamic that we had with Mashima’s former leads in Fairy Tail.

I in no way plan on making all of my reviews for this series about this, but I’d argue the show almost asks for those comparisons on its own. There are some passing background shots that show off characters from previous works (and little references as nice easter eggs are always fun) but Shiki is just a bottle of pink hair dye away from being Natsu 2.0 while other characters are somehow even less subtle than that. Rebecca’s cat named Happy might have a different back story and new abilities, but they are more or less the same character as the cat from Fairy Tail in terms of personality, while the ending shot of episode 2 implies that this might not be a one-off situation. Mileage on this will vary from viewer to viewer, so keep this in mind if you’re not a fan of writers being this self-referential. On the one hand, this makes the science fiction elements of the series stand out more when you consider how far removed we are from the world of Fairy Tail, but I can also just as easily see it as needless and distracting if you were hoping for something completely detached from that world.

In my experience though, this is nothing new to Mashima’s approach to his own works, so maybe I’m just used to it after consuming said media for so many years. Maybe Mashima is so clued into how popular his previous works are to the point where he’d rather us make those comparisons as soon as possible so we can appreciate what else he has in store? I think enough building blocks are here for the show to establish its own identity, so for now I’m giving the show a chance and leaning more on the side of these lookalikes being harmless until it becomes clear that there isn’t much of a story to tell. I admittedly couldn’t help but smile at the thought of some fan-favorite characters being reinvented here, and this was only compounded by the fact that it seems like the dub made an effort to follow the original Japanese audio track in getting back the original Texas actors for these character lookalikes. Major props to the folks at BangZoom for adding that little bit of extra flair to an overall great-sounding package. I personally can’t imagine anyone else playing a different English version of Happy or Erza besides Tia Ballard and Colleen Clinkenbeard respectively. It’s a delight to hear them and I can’t wait for what the rest of the dub staff has in store.

Based on these two episodes alone, it’s way too early to say if this show will be the proper follow-up series that fans of Fairy Tail and Rave Master have been hoping for. The foundation has been laid out, but let’s see if this becomes a show that can take on its own shape instead of being content laying in the shadow of what had come before it. There’s a whole Sakura Cosmos to explore and I’m as excited as Shiki to see more of it!