Episode 10 – Higurashi: When They Cry – SOTSU 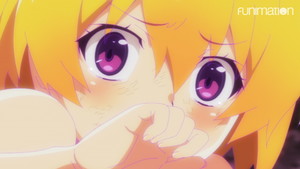 I was really hoping the arc would end in this episode, but I’m willing to allow it in favor of the new info we got this week. I’m sure a lot of the audience’s feelings is going to rely on how charitable they’re willing to be toward Teppei. Satoko’s own feelings toward her formerly abusive uncle have steadily changed over the last four weeks as she’s lived with him. This is one case where her plan definitely got away from her, as I’m sure she never thought it was possible to find comfort in living with her past abuser.

Much of this episode is spent on replays of Keiichi and the village of Hinamizawa’s crusade to get CWS to remove Satoko’s from Teppei’s care. There are other small portions focusing on Ōishi and his conniving ass. The detective (as other’s pointed out in the forum last week) is playing along with the villainization of Teppei because he thinks it’ll draw out the murderers who sacrifice villagers during the festival. Ōishi seems to think that whomever would murder Teppei is likely the same individuals who dismembered the dam project leaders. I remember when this arc was happening in GOU, it felt like Ōishi was being weird and this episode more or less explains why but it’s a weird case where unless you watch the corresponding GOU episode immediately before or after, it feels like context is missing instead of it being filled in.

The animation is also pretty dang weak here in general. There’s at least one scene with Rika where she goes to answer the phone that looks like it’s missing its inbetween animation. Other shortcuts are also apparent, where skewing camera angles are used to try amp up otherwise minimal movement on screen. Ōishi goes off model more than few times, leaving his mouth looking really strange.

The biggest reveal though is that Satoko’s personality has possibly irrevocably splintered into two entities. There’s a few different ways to interpret how this is shown. There’s the simple explanation of the multiple timelines and constant trauma causing Satoko to develop disassociative identity disorder. Her original, emotive personality is pushed aside by her magic time-travelling counterpart who, not unlike victims of Hinamizawa Syndrome, has become singularly focused on one goal. The two personalities battle for dominance of Satoko and it appears for now that “good” Satoko has lost.

I don’t know what this means for “witch” lore in the When They Cry franchise as a whole. It could mean that witches are (magical) individuals who have abandoned hope and as such have shed their humanity. I can imagine when you discover that all of time and space are merely variations, it’s easy to devalue life as a whole thus leading to boredom. It explains Eua’s outlook and “evil” Satoko’s nihilism. It also grants the writers a way to undo it all by having “good” Satoko prevail and regain control of Satoko’s psyche. That would be a pretty boring way to go out though, we’ll have to see after next week where Ōishi goes on a shooting spree and we find out what Keiichi actually saw in Satoko’s house.