Home » Episode 10 – How a Realist Hero Rebuilt the Kingdom
Anime

Episode 10 – How a Realist Hero Rebuilt the Kingdom 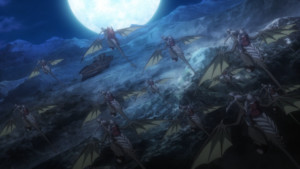 This has suddenly become a much different series in the span of a single episode. After nine episodes of fairly slow buildup regarding the nature of the country and Souma’s reforms, we get thrown into a full-blown war story. Armies are on the march, cannons are firing, and wyverns are taking flight as the Hidden Army battles the forces of the three dukes. There are still some machinations of the mundane sort regarding mercenaries and payments, but now the focus is on strategy and maneuver more than courtly intrigue.

In some ways, this is a welcome change. I personally enjoy fantastical war stories of this sort. Castle walls peppered with magical fire and cannonades, flights of mythical beasts providing air support, the shocking twists and turns of surprise assaults on the enemy’s backline – it’s all great fun. We even get aerial raids on armored battleships with accompanying Itano circus-esque bolt thrower fire, elven arcane archers shooting cannonballs from the sky, and a nice callback to the rescue episode to boot. It’s fun and exciting stuff, even if the stilted animation dulls the shine a bit.

The problem is one of tonal whiplash. It’s really jarring to go from long-winded discussions weighing the benefits and drawbacks of producing cash crops during an economic crisis and famine, to suddenly seeing magical explosions in a high fantasy war zone. I assumed something like this was in the cards, especially given the disastrous move by Souma last episode, but I did not expect the narrative to shift gears to war so quickly.

This pacing also somewhat stretches the suspension of belief of the whole thing. I get it, we’re in a fantasy land full of talking lions and elves – realism was never in the cards. But prior to this episode, the series has always foregrounded the practical concerns of kingdom management and how modern reforms could improve the lives of everyday people with a bit of perspective and political will to make changes. Souma’s superpower is his knowledge of municipal, political, and crisis management, right? Well, apparently it’s also having two giant beasts of burden that can pull a steel-plated battleship with retrofitted metal wagon wheels on a forced march across the country to surprise a demon’s duchy and fend off wyvern air squadrons.

That tonal whiplash is even funnier in the moments where this episode tries to meld the two ideas. Kaede mentions that being able to summon a castle overnight right under the enemy’s nose is thanks to a combination of her powerful ritual magic and Souma’s knowledge of standardized two-by-four planks. Folks, I think we all know which contributed the most to a pop-up castle appearing overnight.

I’m not sure if these qualities necessarily make for a worse episode, but it is jarring and feels like we have entered a different show altogether. I’m not sure if this high fantasy war story shtick is here to stay, but I do wonder how appealing this all is for viewers who have been enjoying the nation-building focus of the past nine episodes…