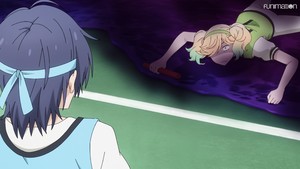 It’s strange to think that episode 10 marks a scant three weeks left with Kouka’s year one, and Kageki Shojo!! in general. That said, episode 10, “A Once-in-a-Century Autumn” is definitively not the end of the series: rather, it continues the sports festival, bringing with it a slew of events and a fair bit of drama in this once-in-a-lifetime centennial day of sports.

Initially, the tension for episode 10 centers on the simple fact that the Summer team needs a student to fill in on the relay. And, as one would expect, the honor of that position falls to the protagonist of all protagonists, Sarasa Watanabe. This touches on Hijiri Nojima’s relationship with Sasara as one of the most bitter second-year students in this show’s sprawling cast. Her hangup is thus: she doesn’t like that Sarasa… is Sarasa. In fact, she really dislikes Sarasa’s enthusiasm and general energy, which is part of the draw to everyone’s favorite genki girl. Even though Sarasa’s far from polished, she’s at Kouka for a reason: she has that special something that they wanted. But like I said, Hijiri really doesn’t like that.

And yet Sarasa has to be Sarasa, and ultimately, that’s the message this week: be yourself. More precisely: who you are is why you’re the only one who can do what you do, which is… cheesy, admittedly, but it’s true! It’s so true, and it’s a reminder that Sarasa needed, especially since she’s been off her game since three weeks prior. I initially thought the central theme of this episode is bullying, but Hijiri’s bad attitude really isn’t the heart of what’s happening. Her bad attitude factors into Sarasa’s slump, surely, but this is ultimately about Sarasa realizing that she’s okay as she is, and that it’s what makes her worthy of being at Kouka.

The weakest part of this episode is a bit of silly comedy re: Sarasa trying to be her ideal self, which involves her essentially stuffing her shirt with chicken cutlets (not actual chicken cutlets, but the kind you pad a bra with) in order to achieve a Japanese E-Cup, which is a U.S. D-Cup, if my bra sizing knowledge is right. Regardless, it’s kind of a silly little fantasy that ends up feeling a bit out of nowhere. I think this is honestly the first time that Kageki Shojo!! has actually made a boob joke, and while it’s utterly nonsensical, it doesn’t sexualize Sarasa past general tropiness. Not necessarily an episode ruiner, but not incredibly funny either.

Ultimately, Kageki Shojo!! continues to impress. It’s a solid blend of levity and drama, compressed into palatable twenty-four minute episodes that always leave me yearning for more. While episode 10 is admittedly not the most compelling episode, it still has a nice message nestled beneath some playful scenes, as well as some solid, discount Training Montage music, à la Rocky. That said, I’m looking forward to episode 11 and seeing this newly empowered Sarasa again. It’s why Sarasa works as a protagonist: her desire to shine on the Kouka stage is magnetic, but she’s still got a long way to go before she can become her beloved Lady Oscar. I look forward to seeing Sarasa, Ai, and the rest of the Kouka first years strive for the top as the series winds its way towards an end, and possibly a second cour.