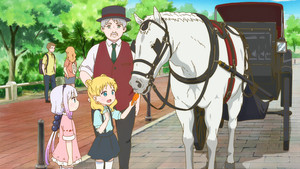 This anime episode has cleared my skin, payed my mortgage, and rejuvenated my cynical mind with pure dragon wholesomeness. Despite some trepidation I had early in the season, Dragon Maid is proving time and again to be not just one of the best looking but the most emotionally sincere series currently airing. Last week we got Elma’s big emotional confession to Tohru and this week we see Kanna reaffirm her familial connection to Kobayashi.

But first she has to runaway from home and when a young dragon decides to runaway, she goes across the whole ocean. That’s how our intrepid Kanna ends up in Times Square and entangled in a kidnapping plot. Well, sorta. The first half is primarily Kanna and her rescued friend Chloe having fun around New York City’s major tourist spots because both are scared to go home and face the music of their actions. Before wealthy heiress Chloe can decide what to do, she’s pulled into an unmarked van and dragon!Kanna has to rescue her and return her back home to Minnesota.

It’s extremely cute. KyoAni shows off their skills by perfectly capturing the energy of Time Square and filling it with a huge cast of uniquely designed extras. There’s also some fun Looney Tunes-style faces when Kanna gets the drop on Chloe’s kidnappers followed by a flight scene that reminded me a bit of Never-Ending Story. The moral is succinct and very Dragon Maid: the people that love you will continue to love you even if you get mad sometimes. The content is carried largely by Kanna’s established role as a perfect cinnamon roll in a brand-new location; it’s otherwise the same sort of charm as her previous excursion to find the end of a river with Saitama.

The second half is Kobayashi and Kanna walking around town as Kanna tries to identify and catalog on the manholes in her neighborhood. It’s a lot of “notice the little things around you” and “everyone has a home” told through small moments like helping a ladybug washed away by the rain.

The whole episode emphasizes how heartwarming the world of Dragon Maid can be while also punctuated by how god damn exceptional KyoAni’s work is. This isn’t just of case of “looks pretty,” it’s a level of detail we don’t get from other productions. There are signs in the background of the neighborhood that are very mundane; notifications of construction for certain dates in August, or store closures due to holidays. No one would dock the production points for not including those, but they’re there and they add just another level of “lived in” to the world of Dragon Maid.