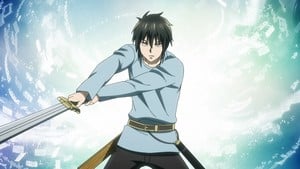 Alright, stupid question: Why couldn’t this have been the final episode of Peach Boy Riverside? I don’t ask that just to express my glib exhaustion with the show and wish that it was over already (though there is that), but out of genuine confusion based on what I know about this series’ supposed mission statement behind its mixed-up airing schedule. If the entire point of this exercise was to reach “a natural ending point” in adapting a series that was still ongoing, this seems like a pretty good place to do it. A big ol’ battle is concluded, some new stages in the characters’ motivations and goals are reached, and we leave off on our main group of heroes stepping out onto the path towards the ambiguous next destination in their journey. It’s clean, it’s got an effective arc to it, and most importantly, it is the actual latest part of the story as shown in chronological order! Even the Mikoto flashback from last week is revealed to have been framed as technically-before most of what we see in this one, and that flashback could’ve been stuck anywhere, really, so what gives? Maybe it’s the season spent overanalyzing too much other bad anime, but arriving at this point as I have already baffled by the broadcast-order decisions of Peach Boy Riverside, I come away more confused than ever about the choice.

Alright, that’s out of my system, I can talk about the episode itself now. And to its credit, it’s alright as a conclusion to a major story arc, even if it doesn’t get to be the actual end of the season here. It’s the second half of the big spread of fights that we saw the start of a couple weeks ago, and it all feels a bit more cohesive than that opening volley did. Perhaps it’s the necessary conclusiveness of having to actually end the battles, or maybe it’s the slightly-bumped production values that continue to contribute to that ‘actual season finale’ feeling, but either way it overall works as a showcase. It’s enough to cause the question of whether I would’ve liked Peach Boy Riverside better in chronological order to bubble up to the surface of my consciousness.

A little bit of reprioritization certainly helps. Frau ends their fight against the big bad bird relatively quickly (and violently, this is still PBR after all), we don’t even get to see any more interaction between Mikoto and sleepy-boi Daminki, only a confirmation from Millia that he fell asleep and missed basically everything. And Sally’s would-be confrontation with Sumeragi turns out to be something of a resolve test, with him getting out of her way without really explaining anything (we’ll double-back with Sumeragi a little later). So that just leaves Carrot and Hawthorn’s fights as the ones needing to dedicate any time to really resolving, handily course-correcting from the all-over-the-place feeling of the episode that got us into all these scrapes.

It’s only a little deus-ex-machina-y that Winnie the Witch pops in after the end of the chronologically-preceding episode to hand Hawthorn a sword he can actually beat Todoroki with, compounded by the fact that we’re still technically-unfamiliar with the Wicked Bitch of Best Western here; Her introductive storyline apparently set to take up the last two aired episodes. So I’d be more fussed about the turnaround being based on Hawthorn rising to new heights off being given an instant-win button like this, but I gave up on context for Peach Boy Riverside long ago, and the showcase in this fight’s second half actually isn’t as lopsided as I might have feared. There are some appreciable escalating effects and animation before Hawthorn just cuts Todoroki down in one final shot, and they stack in some pathos that almost works. I still don’t care too much about Todoroki and his stupid mistaken-identity-motivated attack on Hawthorn itself fueled by his overly-attached crush on Meki/Carrot, but the base idea of his camaraderie with this parallel shonen-action party of Oni that we weren’t focusing on is one I can get behind conceptually. It helps that it’s also tied into the conflict on the side of the Carrot versus Shinki fight.

That one has its own flashes of combat-improvisation cleverness, but what attempts to be the heart of the conflict runs into PBR‘s trademark struggles with bigger ideas. Yes, it’s a fair allegorical assessment to point out that the Oni struggle with levels of prejudice even within their own ranks, and as with Todoroki, I can buy that as a mechanical motivation for these characters’ connections. But it really doesn’t go anywhere deeper than trying to impress upon us how, yes, everything sucks for everyone here. It’s to the point that the writing can’t seem to communicate much about Carrot’s conflict over killing her own kind in defense apart from the fact that she sure is conflicted about it. This whole issue with expression of the story’s ideals carries over into the resolution post-battle, with Sally just displaying her unyielding optimism in the power of compassion to turn around conflicted Oni, opting for the friendship ending with Todoroki before he just leaves.

It’s frustrating because things actually get closer to a stronger analysis of the possibilities of these themes like a scene earlier, as Hawthorn spells out how the battle he just got through (initially spurred by dumb misunderstanding as it was) really spun out of the vicious cycle of revenge. The way he breaks that down and concludes on explicitly not killing Todoroki acts as a neat refutation of the absolutist stance we know Mikoto abides by, which you’d think would be a much better counter-viewpoint for Sally to adopt to make her way towards her compromising goal. Basically, Hawthorn is cool and smart and came away a winner in his fight, while Mikoto is a dumb jerk who ended up sleeping through everything, and I feel like the story would’ve done better to highlight that contrast instead of just cutting to a coda where Sally yells “Understanding!”, resolves to next head to a legendary town where they made racism illegal, apparently, and let Todoroki off to get killed by Sumeragi anyway.

Right, that act serves as portents for the story to come even in the face of this pseudo-finale, though it does leave things hanging in that frustrating way we should really expect from PBR at this point. For one thing, it just contributes even more to Sumeragi not having much going on as a character thus far other than “Bad guy who is mysterious for the sake of mysteriousness”, but it also just leaves a bad taste in my mouth when letting Todoroki go alive was the closest thing the storytelling here got to a symbolic spiritual victory. So it not only begs the question of what the point of that was, but what Sumeragi’s plan here was in the first place, since the simple accomplishment of getting three random Oni killed that he obviously could have offed himself seems to have him pleased with how things turned out. It smacks of trying to write a main villain as more clever and calculated than they demonstrably are, which kind of speaks to Peach Boy Riverside‘s storytelling abilities overall.

But if PBR was as dumb as usual in terms of its writing and ideas this week, at least it technically went out on a decent spectacle. Again, this was all effectively paced, and I liked the fights they pared things down to, least of all finally getting to see my boy Hawthorn get to do something cool. Again, there’s a lot of “What could have been” powering this episode, rooted in how things might have felt to reach this point as part of a naturally-plotted arc, and if the storytelling would have worked better if they’d just focused on the base idea of cool monster fights instead of struggling against clunky sociological analyses and ponderous nothingburger villain plots. Perhaps the forthcoming final two episodes will lend enough context to raise everything else about this series up then, but somehow, I doubt it.

Piplup Gets Super-Sized Plush To Match Its Pride - Interest