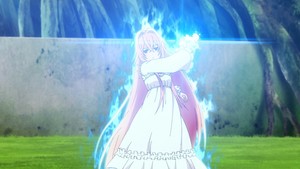 Every single time I think that this series is going to do something just a little bit different it disappoints me. Maybe that’s overstating things – I’m actually thrilled that it hasn’t given in to the “Oh no, a girl with the guy! Hit him!” trope, and the start of this episode continues that trend very nicely. I’m not sure I can recall the last time I saw a harem member claim the blame for walking in on the male lead, but that’s precisely what Sara does while the rest of the ladies are all freaking out over the naked woman in Rio’s bed. And she’s even right; walking in without knocking is generally not a great thing to do if someone’s got their door closed, so if they saw something they didn’t want to, that’s on them.

But aside from that bit of genre-defying consistency, Seirei Gensouki still likes to take the easy way out. Specifically, I’m talking about Aishia being the spirit contracted to Rio/Haruto. Looking at the way the whole thing was initially phrased some weeks ago, plus the abrupt manner in which Rio regained his memories, it really could have been that Haruto was the piggybacking spirit within Rio. That would have been rather more interesting than the reveal that it was Aishia all along, not only because the latter is so much more pedestrian, but also because, apart from being a spirit with messy bedhead, there’s really nothing at all interesting about Aishia. The writing deciding to make her amnesiac is certainly a factor, but even more than that, it somehow decided that “amnesia” also meant “no emotions whatsoever.” Aishia doesn’t even have a personality to call her own; her entire being appears to be made up of the fact that she’s a spirit who knows everything about Rio. Not only does this make her the least inventive of all of the many aspirants for Rio’s harem, it also makes her more tool than character. At least Latifa and Sayo have agency, even if they mostly use it to try to endear themselves to our increasingly bland male lead. Aishia’s just sort of there.

Of course, this could be another side effect from the speed run approach the adaptation is taking. Aishia’s entrance to the scene is clearly not a good stopping point, and since a couple of others that could have been made to work have already passed, that means that she’s really just a means to an end. Since Celia is on the verge of marrying that twit Charles, hopefully not of her own volition, Aishia must be instrumental in helping Rio to stop the wedding. She’s already proving useful – she can open locked windows by shifting to spirit form and hypnotize people so that Rio can ask them questions without giving his identity away. And as amazing as Rio has been painted to be, stopping a noble wedding is probably beyond his capabilities as a lone wolf.

The question is: why is Celia marrying Charles in the first place? Presumably it’s some sort of political arrangement that she can’t get out of, although that first part of the story didn’t go into how many rights women have in Strahl. She certainly always came off as in charge of herself and able to stand up for what she wants, so there has to be something major forcing her hand, because while she could be a bit flakey, she seems very aware that Charles’ name may as well be Evilly McEvil or something equally subtle. The royal family also appeared less than impressed with his interrogation tactics on young Rio (assuming I’m remembering who he is correctly), so that really says to me that there’s something afoot here.

Or maybe I just want to see that. Hopefully this time I’m not giving the show more credit than it deserves, because if it just turns out that Celia is going along with the wedding for no real reason and that no one realizes that Charles is bad news, I think I might scream.

Reconguista in G the Movie I and II - Review