Episode 10 – The Detective Is Already Dead 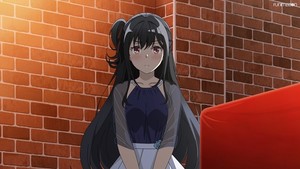 Now that the detective is finally dead, we can move past that prolonged Siesta flashback and return to the present-day stuff. It’s maybe a little funny that we spent so much time on that stretch of Kimihiko’s past with Siesta that I had to do a quick mental check-up to remind myself of our current detectives who aren’t already dead. Nagisa, her past circumstances, and how they inform her decisions now that she’s somehow come into possession of Siesta’s heart are all key information the story is building upon with this episode, but because we haven’t seen her in over a month, I had to keep going “Oh right, that’s what her deal was!” Thing is, that kind of upkeep turned out to be worth it; coming off that particularly lackluster stretch of storytelling with that last arc, I daresay this episode provides the best example yet of what The Detective Is Already Dead has been trying to accomplish with its particular storytelling avenues.

There are some vestiges of a more standard “plot” set up in the margins of this episode, coming together in the confrontation at the end. Char’s return in the present day serves as a way to communicate that there is indeed some Detective Stuff™ happening on the ship that Kimihiko and the other girls are taking a trip on. But that kind of storytelling setup isn’t really the primary draw, at least not for most of the time I was watching it. Instead, the previous detour to flashback town provides us with some angles to really dig into some depths of the current crop of characters. While we still have little to no context for Char’s own existence, her re-emergence here ironically adds a dash of additional context to the situations we know Kimihiko and Nagisa are grappling with.

The question of motivation, of why these anime high schoolers would feel so driven to become “Legendary Detectives,” isn’t one that necessarily needs to have a ton of time and thought put into it within the show. If the mysteries and adventures they were getting into were decently interesting, the events of the plot could carry it just fine. But as has been established, the “mysteries” that get solved by the characters in Dead-tective aren’t the real draw. As related by Nigojū, the novel’s original author, the “mystery” element of the series is centered more on Siesta herself, and with the ideas brushed against this episode, I think I’m starting to come around on the concept of a character as so awe-inspiring that she affects everyone else in some way after she’s gone. The people left behind remain to solve the “mystery” of who Siesta was, both as a person, and as a component of their own lives.

For all the shortcomings of that climactic previous arc, I think I made it consistently clear that the character writing was able to endear Siesta to me, so I can buy her leaving behind a reconnecting gaggle of followers trying to measure up to her absence. Nagisa’s probably the most interesting case to me, motivated by the fact that she didn’t technically meet Siesta, but has instead resolved to inherit her will via the continuously nebulous mechanics of that heart transplant. But as this episode goes on to show, said “will” might be less about what Siesta would have desired from a successor and more about Nagisa projecting her own desires onto the opportunity afforded her. She ends up providing a unique spin on the “wanting to be special” school of character motivation; it’s not simply that Nagisa self-pityingly considered herself a background character in the grand story of life, but rather that her illness effectively prevented her from participating in existence in general. It nets just a bit more sympathy from me, providing a potent contrast with more standard audience-projection ciphers who may just desire this kind of life due to thinking it seems cool compared to their regular world.

Whether Nagisa’s reliance on her interpretation of Siesta’s dying wish is fair to the late detective’s own desires can be questioned. But apart from Char’s initial accusations, the writing feels more even in how it presents this conflict within Nagisa. It almost comes across more like a post-mortem exaggeration of Siesta herself—even people who never actually met her are holding onto her existence as a motivating factor in their lives! Kimihiko basically tries to talk Nagisa into turning it into a springboard, “taking up Siesta’s role” by finding her own way to do that. Her being disconnected from a dedicated goal even forms the foundation of Kimihiko’s climactic declaration to her at the end of this episode: “If you’re not anything at all yet, you should be free to become anything you want.”

Kimihiko himself definitely came across more interesting when he had Siesta to bounce off of, but now that we’re at this point, the story is finding ways to construct his character around his own attachment to the dead detective. As he makes clear in his conversation with Char, Kimihiko finds himself opposite of Nagisa. He can’t bring himself to adopt the mantle of Siesta’s successor, since that would mean acknowledging his mentor’s death. For as much as he bristles at Char’s dismissal of Nagisa at this episode’s beginning, it becomes clear that both of Siesta’s former sidekicks are tied down by her in basically that same way. They even work this characterization into how Kimihiko and Yui interact in what would otherwise be a pretty bland search segment. These two reach the resolution of being the kinds of partners who pointedly don’t rely on each other any more than necessary, a fair arrangement given how we’ve seen Kimihiko’s previous codependent relationship resulted in his current crop of hang-ups. The extremely obvious subtext of this story is denoted in the nominal efforts to find “Siesta’s bequest,” some sort of treasure she may have left behind, when the most clear legacy of her life is demonstrated through all these people trying to pick up the pieces after she’s gone.

That all makes for a Dead-tective episode that engaged me much more than I was prepared for. It’s nothing super unique as far as character writing goes, but it feels like the story is finally getting to reckon with Siesta’s dear departure as a plot element and the options afforded by it. It’s basically the best choice to prop up what they have here, and even then it’s only barely doing it. This episode looks as rough as ever, with some especially flat backgrounds and oddly-placed character close-ups. And the actual story that’s emerging involving Chameleon’s attack on the ship doesn’t come off particularly engaging at this stage. But given that the show pointedly hadn’t done much with that “detective” part of its title, at least for this episode, it’s nice to see it construct a pretty insightful analysis of death, of the grief of losing a loved one, and showing how its characters are working through that.