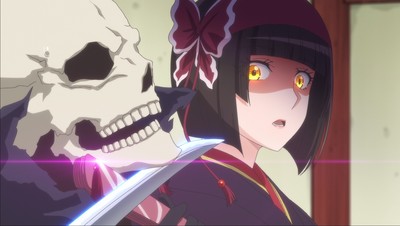 Now that’s more like it! If Tsukimichi is going to insist on taking its isekai fantasy shenanigans seriously, then it ought to at least have the decency to make those shenanigans interesting. “Hidden Ogre Village” is far from a barn burner, but it entertains and intrigues enough to make me forgive its more minor flaws, and sets up some interesting directions for the series to go in its final episodes of the season. That makes it more of a barn warmer, I guess, but I’ll take it!

What makes Hidden Ogre Village is that it actually has a decently strong plot that runs through the episode, instead of the normal routine of featuring two or three different sketches that are just awkwardly smushed together. Makoto and Mio are led to the titular Hidden Ogre Village by Aqua and Eris, they encounter a small but deadly conspiracy that threatens the safety of the local ogres—which turns out to be a spooky lich guy—and they put a stop to the threat before any damage can be done. Utada Hikaru’s copyright lawyers are probably on standby right now, because its as simple and clean of a story as they come, for the most part.

As usual, Tsukimichi‘s saving grace lies in the familiar and fun rapport that Makoto shares with his leading ladies. None of the new ogre characters add much to the proceedings at all, but the whole Hidden Village storyline is worth it mostly to watch Makoto and Mio do their thing in a new setting. For instance, Aqua and Eris’ master, Mondo, is little more than an obvious bad-guy who I was worried was going to get played up as a lazy gay panic joke. There’s still the whole bit of calling him “perverted” for holding Makoto’s hand for too long, which is dumb, but the real joke is that Mio gets pissed over Mondo getting to hold Makoto’s hand for a whole second longer than she did. That’s funny! Mio also gets to indulge in her nerdy side when she gets all excited about how her magical spider-web spying made for her first “wiretapping” experience, and I’m always in favor of letting Mio to have a personality being obsessively devoted to Makoto.

Likewise, I didn’t give a single good gosh darn about the ogres, or the weird animosity they share with their elven cousins, but I did find it funny when Tomoe came by and turned out to be the very same dragon who misted up the village in the first place. Granted, my reservations probably come from the episode’s pacing issues. As much as I enjoyed how straightforward the plotting was, this week, it also felt rather rushed, since we’re in and out of the ogre village without growing to care much at all for any of the new characters. This, in hindsight, makes the two episodes of teasing Eris and Aqua seem doubly pointless.

Except for one thing: That lich boy. If this episode does anything right, it is finally adding another magical member of Makoto’s sexy monster harem, and making him a beefcake bishi to boot. The lich’s quest to become a “grant”—the name given to the people of this realm who have successfully escaped to other worlds—adds a nice twist to Makoto’s origins, and it also gives me the impression that Makoto is actively looking for a way to go back home. I get really annoyed when modern isekai don’t even pretend to give a shit about their main characters’ original lives, so I was happy with pretty much everything about what this lich dude is adding to the story. Plus, he’s voiced by Kenjiro Tsuda, who I’m always happy to hear pop up in a series (even if I can only ever associate his voice with The Beholder from To Your Eternity, now).

The only question that remains is, will this week’s cliffhanger actually matter come next episode? I’m guessing that it will. Not only does Tomoe’s sudden and bloody collapse get played more seriously than just about any beat we’ve seen from the show so far, we also only have, like, two episodes to go before Tsukimichi is over and done with. I don’t know if this show is capable of truly going out with a bang, but baby-steps are better than nothing, so I’ll be happy to see Tsukimichi draw things to a close with a nice sizzle, at least.