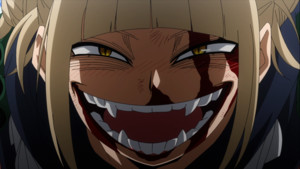 It’s always been dead obvious that MHA is heavily influenced by western superhero comics. While it’s just as founded on tried and true shonen battle tropes, everything from its aesthetic to its textual sound effects are purposefully reminiscent DC and Marvel Comics from all eras. What’s less obvious is how the show’s approach to world building has – intentionally or not – mirrored the progression of superhero stories over the decades. Cape comics were – and generally still are – considered children’s entertainment by both their creators and general populace for most of the past century. But as the years went on, and those children grew up into adults making the comics themselves, the approach to writing started to mature and become more complex. Among many other changes, creators began to flesh out the fantastical universes their characters existed in, creating alternate histories for their works both to separate from and comment on the real world. Now, it’s MHA‘s turn to do the same, taking what has so far been “modern day, but with superpowers” and backwriting a much deeper backstory with the Meta Liberation Army.

We’ve only had vague inklings up til now about what the Liberation Army is all about. Their manifesto is purportedly centered on personal responsibility and the proper hierarchy of society, but it’s in “Revival Party” that we get a full look at what their cause is. “Not suppression, but liberation” is their creed towards Quirks – or “Meta Powers” as they seem to prefer. And it certainly makes sense as a popular response to the generational proliferation of super powers. These are, by and large, abilities each person is born with, so is it just for a government to limit how or if they can use them? Why should only professional heroes, effectively arms of the state and maintainers of the status quo, be the only ones allowed to exercise their Quirks without fear of retribution? One might not necessarily agree with their stance, but it’s an understandable and believable point of view for people at large to take in a world like MHA‘s, and the larger questions and implications surrounding just this cold open add a lot of depth to this story.

The devil, as always, is in the details. It’s anyone’s guess how the original Liberation Army handled themselves or went about achieving their goals, but its current incarnation is decidedly more about supremacy than liberation. Even if they weren’t taking (and maiming) hostages to lure in the League of Villains, it’s clear from this episode that the higher-ups of the organization are more than happy to play dirty with anyone standing in their way, regardless of ideology. Because really, the League – or rather, the imagined version of it tied to Stain’s ideals in popular consciousness – should at least be partially in line with Re-Destro’s goal of Quirk revolution, but there is no attempt at diplomacy here. This is an extermination of a group deemed detrimental to their cause, and a chance for good press by destroying the public’s biggest fear.

That’s a lot on its own, practically enough to fill a whole episode if the show wanted to really spell it out, but this week MHA decided to step on the gas and drive full force into a dozen loaded, overlapping ideas. Thus we get our first matchup between League and Liberators – Himiko Toga vs Curious. What follows is a short fight packed with a truckload of subtext that I could well spend weeks trying to sift through, which is intimidating to say the least. So please bear with me as I try to remain coherent.

First, there’s Toga herself. She’s paradoxically the League member we’ve seen the most of, without actually knowing anything about her before now. We’ve known she uses blood to transform, and that becoming the people she loves is one of her biggest wishes. We also know from her rap sheet that said desire has lead her to kill those loved ones from draining so much of their blood. And we know her love isn’t delineated by gender, since she’s been positively smitten with both Deku and Uraraka since meeting them. She’s also fiercely defensive of those she loves and ruthless towards those she despises, reveling in the chance to screw over Overhaul after he killed Magne. But that’s all observable behavior that doesn’t tell us anything about how she came to be who she is, and it’s Curious of all people who divulges that info.

Curious, meanwhile, is an open book. In a scant few minutes we learn she’s been a journalist for years, working to promote the Liberation Army’s cause and taking Re-Destro’s message of “stories with human heart” to its logical extreme. She’s the propaganda wing of Liberation, and will do anything to find personal human stories that she can spin to support their cause. That’s the key here: Curious is searching for stories not to share their truth, but to create ammunition, and her digging into Toga’s past is an act of violation, not investigative journalism. She doesn’t see Toga as a person who could find comfort or support in the Liberation Army’s goals, but as a face to place onto a convenient narrative – one to be quite literally martyred for the cause.

That idea is less a loaded gun and more an armed nuclear missile, and it all but begs the audience to consider Toga from the opposite perspective. It’s no secret her character’s immediate appeal taps into the by-now typical Yandere archetype, what with the love and obsession and murder. But here it’s hard not to view Toga from a more grounded, human perspective, and ask is she’s really “crazy.” Because yes, a child with a fascination/admiration for consuming blood is unusual, shocking and potentially disturbing even, and most certainly unsanitary, but not inherently dangerous. Toga was just a child, exploring the world the way her developing mind and body urged her to, and with proper understanding could have been an off-kilter but perfectly friendly person. Instead she was deemed a deviant, a “demon child,” because her psychological condition made her inconvenient or unpleasant to handle, and so she suppressed it until the dam finally broke and became the villain they believed her to be. Way back in season three, Twice said that this world’s Villains are people who slipped through the cracks of a world that cannot tolerate them, and now we know just what he meant.

The clincher to it all is that Toga doesn’t contradict Curious’ assessment until the woman tries to make her a tragedy. That, she rejects wholeheartedly. She recognizes it’s difficult to live the way she does, that it makes her a reject, but it’s all worth it to live true to who she is – and who she wants to be. There’s a billion different theories as to why her quirk evolves at this moment – the threat of death, late puberty, narrative convenience – but to Toga it’s confirmation that she can keep being who she is and aspire to become closer to those she loves. It’s left implied just what makes her so interested in Ochaco, Deku, or Stain, but I think in some ways she admires their willingness to stand up for what’s important to them, whether it’s against a dangerous opponent or Hero Society itself. It’s also just a striking image on its own, watching a terrified and desperate facsimile of our lead heroine using her power to kill dozens of people at once, while the bloody, smiling face of one our most iconic villains peaks out from underneath.

Really, the whole episode is packed with powerful, gut-punch images that last all of a moment, and if I have one gripe with this episode it’s that there’s so much packed in alongside Toga’s fight that it threatens to split focus. The big scene is when Shigaraki seems to find his own power-up, lost in a haze of exhaustion, repressed memories, and wanton violence to decay a whole crowd of people to dust with one touch. Dabi also conveniently winds up fighting an ice-user, because I guess nobody at the Liberation Army understands type advantages. It’s not that this other material is bad, and it’s clearly building towards the next confrontations in this arc, but Toga’s story was compelling enough on its own to justify a whole episode without sharing time.

Ultimately though, this is a thrilling, gripping, and layered piece of character drama that challenges MHA‘s established world and ideas in evocative and fascinating ways. You couldn’t ask for a stronger statement for the real beginning of My Villain Academia.