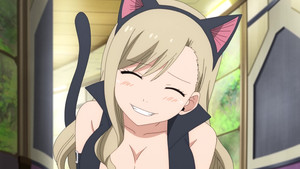 We have finally reached the end of the first season of Edens Zero…which is what I would like to say if it wasn’t very clear that this is more like the end of the first half of the first season no matter what Netflix tries to tell us! I say this because the general pacing of these two episodes actually progressed much faster than I originally thought they would, to the point where half of episode 12 already felt like the start of the next arc. On the one hand, I am thankful that the series keeps things so brisk and fast-paced without really feeling like we’re glossing over important material (my personal feelings about climaxes happening mid-episode aside). I was actually surprised at how episode 11 in particular wrapped up almost everything about this arc with payoffs that mostly felt pretty satisfying. The parallels between Rebecca and Shiki’s final confrontations with the separate groups of enemies were very cute and almost acted as a good full circle wrap-up to these 12 episodes. The idea that Shiki won by utilizing something that Rebecca taught him in such a casual, laid-back setting feels very fitting to their relationship. Personally, I would’ve liked it better if we got that scene in a previous episode to create more of a natural dramatic payoff rather than a flashback that we only see here. Plus, I feel like this does still get a bit muddled with a lot of the aforementioned stuff regarding Rebecca that I mentioned in my previous review. However, she does get some great moments to shine here both as a protector and as someone who helps affirm one of the main emotional cores of the group; just because something isn’t logical or selfish, doesn’t mean that it’s not the right thing to do. I like the fact that she was rewarded for her bravery by the end of this confrontation and I also like that these feelings of camaraderie are beginning to spread to the other characters. This crew is beginning to feel more like a family, and I am all for that.

Given where we’ve traveled in these past 12 episodes, I think I can finally answer some of those questions that I was having at the beginning. Edens Zero is shaping up to be exactly the kind of show that I wanted it to be: a fun adventure with an infectious sense of joy and creative science fiction ideas. In such a cold galaxy dominated by villains, bandits, and loners who are only out for themselves, Shiki is a character who seems to provide a counter to that ideal. Maybe the universe doesn’t need to be that way when there’s so much wonder to be taken in. Everyone is on a mission to find something, but maybe you can enjoy the adventure with a group of people along the way. Everything else that was present in that final episode is very much set up for more things to come, so again it’s hard to comment on them at the moment now. We’re just gonna have to wait until Netflix is ready to continue going on this adventure but I am patiently waiting for that day to come with a grin on my face as wide as the devil king himself.