Episode 11 – Higurashi: When They Cry – SOTSU 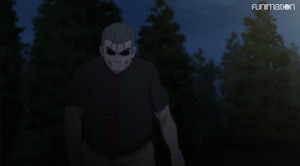 Admittedly, it’s hard to write about this episode in particular. It fails to answer any remaining questions about the arc because I would expect anyone who watched everything up to this point to know what happened. The only element that wasn’t completely spelled out was what exactly happened to Keiichi but with Teppei dead at the end of the previous episode the only remaining options were Satoko or Ōishi doing him in.

That is to say, this episode is a bloodbath but its mostly giving us visuals of what we already know. Satoko lures Keiichi to her house after playing the helpless little sister. She beats him to death and then manipulates Ōishi’s paranoia to get him to murder Rika and everyone else at the festival. Meanwhile, I’ve been chomping at the bit to finally get us back to the “current” timeline where everyone has figured out that Satoko is orchestrating events. It’s been a long time coming and we’ll finally be back in the classroom starting next week.

If I had to comment on anything, its this episode’s overall visual inconsistency. There are several blood-soaked scenes where the primary component (blood) is rendered as this hazy sort of filter. Satoko doesn’t look bloody prior to entering the shower, she just looks fuzzy. The red itself isn’t quite right and the scene lacks impact because of it. Rika’s death seems to correct this and looks far more horrific although notably it the animation team employs some creative censorship throughout to keep the camera from showing too much of it. Some of Ōishi’s rampage is cut away Eua viewing fragments.

I would have to revisit the episode to say for certain, but I feel like Satoko-on-Rika violence (and of course that scene where Mion stomps her head into a toilet) was far more brutal than Ōishi’s turn here, at least as far as what we actually see compared to what’s implied. I’m wondering if adult murdering a child gets the censors more sensitive than kids killing one another.

Anyway, if anything this episode exemplifies the narrative handholding folks have complained about in the forums here. It was ultimately unnecessary outside of showcasing Rika’s despair coming off what felt like a major win towards happiness and it doesn’t even do that very well. The gimmick of seeing Ōishi lose his marbles wasn’t enough to justify the entire episode. This arc had a few good emotional and narrative beats but I think it could have been reworked to remove at least one episode.