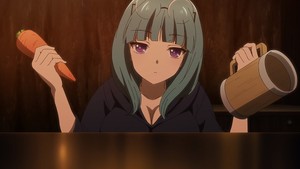 I immediately feel apologetic at how dismissive I was towards Winnie the Witch in my review of last week’s Peach Boy Riverside, as we learn from her proper introduction in this episode that she might actually be the best character in this thing. This lady eschews the rest of society to live in the woods in her own personal bar, that’s the dream! On the one hand, this as-usual makes me consider how this might have helped the presentation of a chronological-order airing of PBR, as I would’ve reacted to Winnie’s return in the ‘last’ story arc with a fist-pumping “Hell yeah!” rather than uninformed indifference. But on the other hand, the story that gets underway as everyone gathers at the First Pagan Bar & Grill does seem like it might reach a thematic denouement effectively worth wrapping on. We may be out-of-order from following on the preceding episode, but Peach Boy Riverside‘s feeling of a moderate uptick in quality in that one continues apace regardless, it seems.

Flailing-about as she has been in the physical confrontations up this point in the story, the inciting element of this plot involves Sally committing to upping her combat abilities to compliment her resolve towards the more diplomatic elements of her “Stop everyone from being so dang racist” goal. So we get some snippets of her learning sword-fighting from Hawthorn, and working her way up to learning magic from Winnie. Now it’s possible I’m forgetting some of the parts of PBR we already watched via time-travel, but I don’t really recall Sally using magic in any of those future stories. So it stands to reason that she’ll depart without obtaining any of those sweet, sweet spells she desires, but perhaps having learned something about herself along the way. That feeds in with the way everyone else seems to be learning stuff about her here.

We still don’t seem to be getting any closer to a concrete explanation for the Momotaro powers that Sally seemingly shares with Mikoto, but at least thanks to Winnie having a recording of the princess’s takedown of that walrus Oni, everyone else in the party, including Hawthorn, is aware of what she can really do. In that case, it seems just a bit odd that Winnie wouldn’t offer video evidence of Sally’s powers to Sally herself, but again, as we already know Sally has awareness of those abilities in future stories, it stands to reason that she’ll learn about them somewhere in the climax of this plot with next week’s ‘final’ episode. That structure conspires, even at the end here, to turn several plot-points into a watch-checking game, a simple matter of ‘when’ rather than ‘if’ major plot turns will occur, as we already know they do.

Some of the extrapolations internal to this story fare better than the more major plot stuff then, simply because they’re still fresh revelations to us. Winnie gets added to the list of ancient powerful beings that Frau is apparently friends with, as they nebulously reflect on Frau’s true nature and supposed ability to end the Human/Oni conflict with their own power if they really wanted to. That hesitance seemingly speaks to Frau’s desire to see what Sally’s hopeful mostly-nonviolent approach to racial compromise turns out like, rather than simply going all demon-bunny on any aggressors. This adds yet another corner of curiosity to Frau’s already intriguing character, making them less enigmatic in the ways they choose to engage with people, standing by simply as an observer deciding when to intervene with their incredible power, if ever needed.

The idea of these powerful elder beings sitting back to see what the kids of the new generation come up with also feeds into what we get on Winnie here: She’s apparently old enough to have known Hawthorn’s grandfather (apparently all these ageless superpowers went to high school together or something), and part of her hesitance to reveal Sally’s true power to her is borne out of the possibility of her being branded a ‘Devil’ the same way the witch was. It ends up coming off like Winnie didn’t shun society so much as the opposite happened, and she’s been left swearing to protect a world that hates and fears her. So even with that ostracization, she’s willing to help out some outside elves and lizardfolk when they come to her for assistance with a mutual Oni menace.

This is another case of retroactive recognition from PBR‘s shuffled storytelling, recalling as we do all those references to a fight with a tree Oni several weeks ago. We know from those allusions that things didn’t exactly go according to plan here, but in the present this is all about stacking the situation for how it’ll interact with that ol’ racism subplot, specifically Sally’s engaged approach to it. Yes, it’s only a little goofy to watch other characters react with wonder at her egalitarian nature (She doesn’t even see species!) but it also injects some long-disregarded nuance that I feel like we only otherwise saw at the endpoint glimpsed last week. There’s an interesting aside about the Lizardfolk leader admitting he’s going to kill the tree Oni not for anything it specifically did, but because the recent rise in threats from Oni-kind necessitate him doing so to put his people’s minds at ease. His utilitarian approach to the task provides another effective counter to Mikoto’s absolutist opinions that really should have always been effectively challenged in this story.

On the other side of the coin, you have Hawthorn’s experienced inquiries sussing out that the elves are planning to use to attack to take out both the Oni and the Lizardfolk, rounding back to the ills of that uncompromising racial approach. Clunky as a lot of this setup still feels in terms of how it meshes with Peach Boy Riverside‘s overall storytelling ability, it’s actually appreciable to see here simply in how they use it to add more wrinkles for the characters involved apart from “Everyone goes to kill a big monster”. We know things don’t exactly work out for the proposed compromise plan Sally puts out at the end, but I must admit they’ve got me attentive to see how everything ends up going to hell.

There are some other neat little asides on this episode’s timeline apart from Winnie’s introduction. We also get to see the ‘first appearance’ of Millia in her fully-Oni ‘Hatsuki’ form (and find out that she fights by manipulating her blonde hair, explaining where her new name came from). Her and the tree Oni get some amusing combat conversation happening just in the background of Sally and the heroes discussing strategy. But mostly, this episode showed that even as I’m definitely sure Peach Boy Riverside would have worked better aired in chronological order, this storyline might prove to be an okay one to go out on anyway. At least I feel like I’m looking forward to seeing how it’ll shake out next week, rather than simply being glad the show will be done by then.