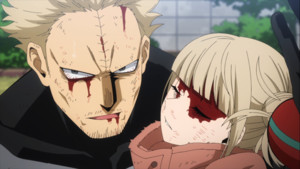 Back in season four, MHA started lightly asking questions about its own definition of “Villain” and all the sundry implications. Mainly through Gentle and La Brava, it started broaching the topic of sympathetic motivations for turning to a life of crime, but that was like wading into the kiddie pool in the grand scheme of things. Gentle was technically a criminal, a “Villain” by the in-universe laws of MHA‘s Japan, but he was a small-time nuisance whose most heinous on-screen act was throwing hands with a 16-year-old for a YouTube prank video or failing to rob a convenience store. Now that we’re chest deep in an arc all about our central villains, the question of whether or not any League members can come across as genuinely sympathetic is a lot more loaded.

The answer to that question, ironically, comes from by far its goofiest member. Twice has been a personal and fan favorite for a while, going back to his villain origin story at the end of the third season. Before, he’d been a wacky Deadpool knockoff with a gimmick that made everything he said slightly harder to understand than necessary. After, he was by far one of the most fascinating members of MHA’s antagonists, a pastiche of other comic supervillains with just enough underlying humanity to feel genuine. He was a guy with a tortured past, who’d come through it shaken and shattered, and has spent his life trying to pick up the pieces in shadow, scrabbling through the alleys of society with what few people he could call friends. Combined with his sincere camaraderie with the other members, it’s hard not to like him even as he facilitates the League’s attacks.

Now, with this latest episode, we dig past that last layer of comic book logic to gaze full-on at the simple, human core beneath it all. While Twice’s full backstory involves his Quirk, the beating heart of his origin is purposefully mundane. He was a lonely man with few connections, who was cast out by bad luck and an unfair society, and eventually spiraled into his own worst instincts in search for comfort. All the stuff about clones turning on each other is ultimately set dressing – super powered flourishes to make the subtext more literal and visually dramatic – that draws the eye to the vulnerable man who at first glance seemed like little more than a joke. He’s a “Villain” in as much that the world around him has codified the term into synonymy with criminal, but in his heart of hearts Twice is as loving a person as any of our altruistic heroes. What he wants more than anything is to find people who accept and trust him, and pay them back in kind, and there are few motivations more sympathetic that I can think of.

Which makes his epiphany here all the more cathartic. This isn’t the personal vengeance of Toga, nor the bittersweet last stand of Gentle. “Sad Man’s Parade” is an iconic Shonen Hero moment, an ecstatic turning point that culminates and celebrates all that pent-up character development, only it’s delivered by a 30-something domestic terrorist rather than a bright-eyed teenager. Twice’s disarming weirdness always made him seem like a pretty weak threat, but Giran’s comment about his potential to overthrow a country really makes sense now that we see it in full force. A literal one-man army, capable of near-instant self-replication, is an imposing threat to all but the most powerful of Heroes, and even they could believably be overtaken by the horde of Twices we see tear through the streets and turn the tides of battle. The Meta Liberation Army talked a big game when it was six against an entire city, but now we get to see how they fare with even numbers. Though thankfully Twice seems to have maintained his goofy personality in all this, and just the image of his Double army TikTok dancing through the streets, shouting “Oh no, me!” in despair when one of them is taken out, is supremely delightful. It’s like if Deadpool cosplayers at conventions were actually funny!

In keeping with this arc’s pacing, however, that’s far from the end of things. We check in with Dabi’s battle against the ice-user Geten, and while it’s not a full backstory we do get a teensy l’il detail about Dabi’s full fire power being too strong for his own body to handle, which puts him on the Liberation Army’s chopping block all on its own. The more we learn about this group’s closest held beliefs, the more toxic they appear, honestly. According to Geten, the ultimate goal is to not just free society from Quirk restrictions, but to carry that into a full-on super-power hierarchy where those with the strongest, most exceptional super-powers are in charge. That really gives away the deal with these guys – they frame their cause as a cure for society’s ills and the remedy for decades of injustice, but in the end their goal is to restructure things with them at the top, never mind what that worldview implies to the portion of the population who don’t have Quirks at all. It’s all about scaling the ladder and holding power, and any ideology beyond that is to make it more palatable.

Sadly we don’t get to see if Dabi has much response to this beyond telling Geten to get bent, because Twice’s army phase skips past the other mid-bosses and straight to Re-Destro’s tower. And if I thought MHA was working double-time before now, it manages to pack an astounding amount of info and implications into just one oral history lesson. In a single speech, we not only learn the more personal motivations behind the Liberation Army’s leader, but also get the full legacy of Destro the historical figure and start to recognize the darker context of this super-powered world’s history that we only ever caught glimpses of before. Way back at the start of this season, we saw from Deku’s dream/flashback how All For One took advantage of the chaos of a suddenly super-powered world to build influence. But Re-Destro’s lecture paints a much smaller, singular picture of that historical fulcrum point; a lone mother, begging those who feared her child’s power to see him as a person same as them, before being stomped out by unfettered paranoia and unease.

There’s a lot to unpack there even before we get into the topic of how the government eventually turned her speech into policy and accepted terminology, but the core of it all is that Re-Destro himself has a lot of skin in this game. He’s played the cool and aloof final boss for a couple episodes, but now that the League – and Shigaraki in particular – have made it to his doorstep he’s ready to wring these young posers out. This is a man who’s spent his entire life building towards revolution, who carries the weight of two past generations on his shoulders, and the seething resentment he holds towards these directionless upstarts threatening all that is palpable. The Liberation Army themselves have been fleshed out largely through implication and innuendo, and there are definitely issues with that approach that have made themselves apparent through these last two arcs. But here at least, Re-Destro feels all too human and familiar.

Now we’re set up for the leaders of both teams to finally throw down. I’ll admit that comes a good deal faster than I expected, and we have at least one more Liberation Army leader to deal with on the sidelines, but I can’t complain too much when the material gives me this much to chew on minute-to-minute. This is a busy, chaotic arc that has managed to communicate more about the larger world and themes of MHA than nearly anything before it, and I’m excited to see where it takes us next.