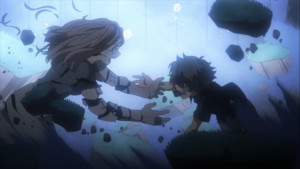 Something that I’ve always admired about MHA is its dedication to character voice. Pretty much every character of even minor import is written not only with a distinct personality, but a discernible and consistent interiority that separates them from just being a mouthpiece for the narrative. We’re not always privy to every person’s backstory, but you can often tell a lot about any given character by how they act, speak, and react to things around them. It can cause some problems though, at least for me. If I want to discuss the message or moral of an arc in Black Clover, I can rest assured one or more characters will eventually show up to put it into exact words how I’m meant to feel about it. I may or may not agree with or like that message, but I can be confident that I’ve walked away with the intended interpretation shared by most people who read/watched it. It’s simple, clean, and most discussion boils down to whether you liked any given fight.

With MHA, thing aren’t always so clear cut. This isn’t exactly a subtle show, even by the standards of action shonen, but it’s not always guaranteed that what a character takes from any given storyline is what the audience is meant to. That’s especially true with the My Villain Academia arc, where there’s no trustworthy hero to clear everything up and give us a birds-eye view of the whole conflict. The only perspectives we get for this fight or the ensuing flashbacks are from people tangled up in the weeds of it all, and that makes interpretation a lot more of an active and potentially volatile process. For instance, is Re-Destro’s statement that Quirks dictate one’s personality an actual fact of MHA‘s universe, or is that just what he believes himself? I’d argue it’s the latter, as I’ve seen enough of this show to feel confident where it lands on the Nature vs Nurture debate, but I’ve also seen people take this as the narrative buying into biological determinism with total confidence. That level of ambiguity is generally something I’m grateful for, but it also makes discussing its most important points a lot more personal.

In short, it’s intimidating to try to write with any authority about “Tenko Shimura: Origin” in a way MHA has rarely been before. Just take Spinner’s moment in the opening minutes. We’ve known since his first appearance that the guy was a huge Stain fanboy, but now we know how he got there. Through the briefest of flashes, we see a pre-League Spinner huddled up in a messy room, fascinated by the speech Stain gave seasons ago. Trumpet says the quiet part aloud, calling him a disaffected youth with no real cause, and he’s not wrong. Spinner, however, doesn’t really care. He wants, maybe even needs a role that will finally let him release the fire Stain started inside of him, and that’s ultimately what Shigaraki represents to him. It’s far from rational, and the show certainly isn’t saying Spinner’s radicalization is a good thing, but it seems sympathetic to the loneliness and unease that led him there nonetheless. That’s a hard tightrope to walk even when your show isn’t in the middle of three other ambitious and complicated character stories, but MVA has been shooting for the moon with its ideas since the beginning, so I suppose it would be out of character to stop here.

Thus we get to the meat of this episode, which you would think would be Shigaraki vs Re-Destro, but that’s not the kind of arc this is. They get into a bit of a scuffle, Shigaraki’s hand gets shattered to bits and we see how much those weeks fighting Gigantomachia helped level him up, but the setpiece of this episode is right there in the title: before he was Tomura Shigaraki, he was Tenko Shimura, a kid with itchy eyes, a friendly nature, and a stifling home life ruled over by his father. And it’s this flashback in particular that I’ve been anticipating and dreading to talk about. There’s just so god damn much packed into barely 15 minutes that begs to be discussed, and much of it comes from ideas only ever implied but never confirmed, even as it explains nearly everything about our central villain.

Shigaraki’s defining feature has always been his combination of anger and aimlessness. He’s a bitter, misanthropic man who only ever seems happy when he’s wrecking something other people have built, or getting one over on people for looking down on him. But he’s never been great at actively pursuing it, only ever reacting to other characters ordering him like All For One, or challenging him the way Stain and now the Liberation Army have. His biggest personal revelation of the series was just figuring out where to direct all the pent-up anger he’s carrying around, but even then he’s made little progress. In many ways he’s the classic case of arrested development, a 20-something filled with unease and displeasure without any concrete ideas on how to channel it, and that raises the question of why. Why is he so angry?

That answer, as seems so often to be the case in MHA, is family. There are a million little details from the Shimura household I could pick at for ages, and it’s hard to know where to start. The first, I suppose, is that itchiness. There’s no explanation for what, precisely, causes Tenko’s itchy eyes, though signs point to it being a psychosomatic anxious response to his father. It’s also not totally evident if Tenko’s quirk spontaneously developed, or if he’d been unconsciously suppressing it. But what is clear, and what ultimately matters, is what that all represented. Tenko wasn’t born an angry, dangerous person, but a friendly kid who just wanted to be himself without fear of retribution. What he wanted to hear from his family was the same thing Deku wanted at the very beginning of this show – to be told that he can be the hero he dreamed of becoming. It’s a simple, but impossibly vital callback that links our main hero and villain – not through destiny or evil machinations, but through a universally human desire for validation.

But those words never came, and instead Tenko was shoved down by a parent who couldn’t move past his own hurt. The painful irony of the lesson Kotaro took from his mother leaving him could honestly fill up an entire column, along with the now firmly established theme of generational trauma perpetuating and worsening issues that reverberate to the next generation. And it’s even worse here knowing Nana made her decision with the best of intentions, wishing for nothing more than her son to grow up happy and safe from All For One. But just as All Might’s indomitable pillar left society at large unequipped to deal with his absence, there are consequences to compassionate deeds beyond what we imagine. It doesn’t excuse Kotaro’s abuse, nor exonerate him, but it paints a deeply human picture of an adult who passed on his anger onto his son, only to crumble when it came back to him.

And then there’s the sequence itself. MHA has dabbled in body horror a few times, even made some gross looking meat monsters with Overhaul’s adhoc transformations, but the final minutes of this episode easily take the cake for sheer, visceral horror. Beyond just the terror of seeing Tenko’s family decay – and the gory remains – it’s indescribably unsettling to watch the whirlwind of emotions he goes through; terror and confusion giving way to shock, Shigaraki’s narration highlighting the underlying anger that spurred it all, and finally ecstatic rage when he chooses to destroy his father and the house he built. It’s incredibly dark, but potent in a way that keeps it from feeling like it exists for pure shock, and that allows this to be a genuinely poignant moment for both character and narrative.

Yet somehow we’re still not done. There’s still more to come next week, presumably detailing just how All For One took Tenko in and turned him into his apprentice, before we get back to the chaotic conclusion of the battle with Re-Destro. I’m grateful for that, partly because it keeps this review under 2000 words, but also because it indicates a difference between the life of Tenko Shimura, and Tomura Shigaraki emerging from that trauma-riddled shell. This has been an arc all about how these character became villains, and for as horrifying as this story is, it would seem this alone wasn’t what led our villainous protagonist to where he is today.