Episode 12 – Higurashi: When They Cry – SOTSU 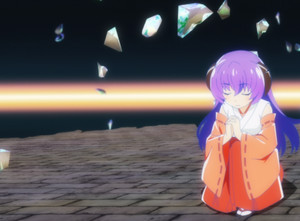 I regret to inform readers that this episode is 95% stalling and 5% new plot content. I really, really hoped folks in the forum that pointed out we’d need some kind of episode counterpart to “how Rika goes from five remaining timelines to one” were wrong because we didn’t need…any of this episode.

The episode opens with Rika unconscious in the Fragment World with Hanyū who takes it upon herself to do a short narrative monologue. She talks a little bit about her life prior to her death in a context that sounds a lot like Jesus, except in this case she’s a slighted deity and the person who sacrificed her for the sins of man is her own daughter. She talks a bit about how much she was looking forward to Rika’s birth because as the eighth in a long line of Furude daughters, it meant that Hanyū would be able to be resurrected and reenter the world. It was this attachment that led Hanyū to “gift” Rika with the ability to loop.

For some reason during this emotional monologue, Hanyū’s “horn” heals symbolizing her return to full capacity which also means Rika can now remember the circumstances of her death in each loop (something we already knew post episode 14 from last season). Hanyū’s recollections of her past is the only substantial new content in this episode. We also learn that Satoko and Eua can view what Rika and Hanyū do on their own little fragment island. We then have to watch a rehash of the hide-and-seek game so that we know for sure that Satoko broke the sword and hid it followed by inconsequential details about Rika’s subsequent deaths by the randomly selected side characters.

The episode ends with Hanyū manifesting in the same space as Eua, likely setting up a supernatural confrontation to mirror the upcoming one between Satoko and Rika. Also, it’s possible this episode retcons parts brought up in GOU. I looked back on my reviews and the sword is shown to be missing in episode 7, when Keiichi and Shion go inside the storehouse with Tomitake and Takano. In fact, Tomitake even tells Keiichi that the statue’s head was “already broken” and the sword is obviously gone. As far as the looping is concerned and the way events play out in this episode, Rika doesn’t realize the sword is gone until the Episode 14 of GOU, in the Nekodamashi-hen arc. So when did Satoko take the sword? It doesn’t make sense that she’d hop back into the Watadamashi loop to get rid of it before Rika can find it…I’d imagine the sword would reset in every loop?

I don’t get any joy out of yelling about the shoddy pacing each week, so instead I’m going to highlight the interesting part of Hanyū’s participation in this episode. This primarily relates to her discussion of Hinamizawa’s past. Even if Hanyū wasn’t actually a goddess a millennium ago, she wasn’t human insomuch as she and the rest of her tribe had “horns”. Onigafuchi Swamp was already inhabited by humans when they arrived and were subsequently discriminated against due to their appearance. However, she starts a family with a human man from the Furude clan and they have a daughter together.

To my knowledge, none of the previous animated incarnations of Higurashi have touched on the full breadth of Hanyū’s backstory as it’s shown in Kotohogushi-hen, which was included in the Nintendo DS port of the game, Higurashi no Naku Koro ni Kizuna. While many have pointed out how GOU and SOTSU introduce more concrete ideas behind Witches as they appear in Umineko, I’m curious to see if Hanyū and Eua’s confrontation might give us more Kotohogushi backstory. The two beings are obviously familiar with one another but their relationship is pretty elusive.

This episode left me pretty high and dry. Or it might be more accurate to say the last three or so weeks have been pretty uninteresting from a viewer standpoint. I’ve also made sure to double-check the GOU episode counterpart after getting hyped last week and I regret to inform everybody that we’ll probably get more recap as Satoko pulls Rika’s guts out but, at least we’ll know that Rika remembers it was her?