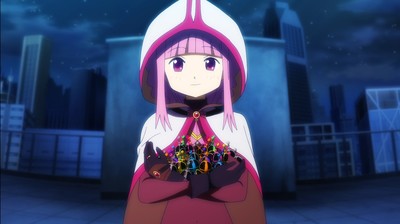 “There Were Too Many to Carry” is another very solid episode of Magia Record in a season that, so far, is really proving the merits of economical storytelling. The Blu-ray marketing materials that the show’s official website have put out do seem to confirm that this second season will only run 8 episodes, and that honestly makes a lot of sense. I’m sure it’s a much more manageable workload from a production standpoint, but it has also turned out wonderfully for the show’s overall pacing and quality, as well. The three episodes we’ve gotten from Magia Record so far this year have been massive improvements over the first season in nearly every way.

I’ll be honest: Even though Iroha is our ostensible main character, or at least she’s right up there with Yachiyo, I probably couldn’t have meaningfully described her as a person up to this point, even if you put an oversized Mami rifle to my head. Her role as a kind of passive observer to the show’s increasingly complicated Magical Girl/Witch/Magius/Doppel shenanigans is very similar to how Madoka was handled in her own story, but that’s precisely where Magia Record‘s expansive scope came back to bite it in the butt. Madoka Magica was, when you get right down to it, a very simple story, with all of the layers of dark mystery and tragedy adding a lot of depth to a pool that wasn’t especially wide. You had a handful of color-coded girls who each had their distinct character traits, and all of their personal conflicts were easy enough to condense into a single wish.

In Magia Record, we have a cast that has effectively doubled or tripled in size, with a plot that is driven by mysteries and twists on the original lore that have only been partially explained even as of this second season. In Season One, the characters couldn’t be the same exact archetypes that we saw in the original Madoka Crew, especially since those characters are still around and actively involved in the story, but they couldn’t be too offbeat or idiosyncratic, because there just wasn’t enough time to develop them all. So what we were left with were half-formed ideas of characters, including Iroha, who never quite made enough of an impression to allow Magia Record to stand on its own as a story.

The one exception there was probably Yachiyo, whose obsessive and romantically coded relationship with the pink-haired protagonist mirrors Madoka and Homura’s whole deal, though Yachiyo’s cold and calculating nature came from a very different place. More importantly, we got to see the betrayals and losses that broke Yachiyo down unfold in a way that, for whatever reason, left a more lasting impact on my memory of Magia Record. Granted, the incredibly high quality of last week’s Yachiyo-centric episode might be coloring my impressions of what came before, but the point still stands that Magia Record started this second season at a disadvantage when it comes to the audience’s buy-in with its characters and world building.

You’d think that the truncated length of this season would have just made these issues worse, but it’s actually had the opposite effect. With no time to waste, the scripts for these episodes have dispensed with any faffing about, resulting in a season that is shaping up to be a lean, mean, Sad Magical Girl generating machine. The first two episodes of Season Two managed to get the audience more-or-less up to speed with all of the new lore and recent story twists, and Yachiyo’s quests to hunt down Magius and rescue Iroha made for compelling drama in their own right. I don’t think the new Magia Record is quite efficient enough for me to say that you could skip the first season altogether and start with this one, but it’s still damned impressive.

In “There Were Too Many to Carry,” Iroha feels like a distinct protagonist for the first time. When Yachiyo and Kuroe venture into the Rumor of the Eternal Sakura tree to try and free Iroha from her self-imposed prison, they arrive in a dreamscape version of Mikazuki Villa, where all of the first season’s cast is living an idyllic life together as if the ruinous final arc from last year never even happened. Not only is this a convenient reminder that Tsurono, Felicia, and Sana are a part of this story, but it’s also a revealing look at the fundamental sadness of Iroha’s whole worldview. This melancholy aspect of her character was present in the first season, yes, but it always came across like something we kept having to be told, instead of something we keenly felt.

Here, the way Iroha’s personality is shaded with the signature style of the Witch/Doppel Domains makes that lonely and ominous aspect of Iroha’s persona hit with full force, and it makes Iroha into a heroine that is more than a mere Madoka clone. Her desire to retrieve Ui from whatever Wish limbo that swallowed her sister up in the first place made for a fine plot detail before, but there’s something more tangible about their messy sibling bond when you see Iroha gushing and cuddling over a creepy little teddy bear. Later, when Yachiyo and Kuroe battle Monster-Bear Ui and Iroha’s Doppel, there’s a lot of talk about how Iroha has lost herself in an idealized fantasy world, that an infantilized and perfect toy of Ui is no replacement for the real thing.

It’s a familiar and arguably overused trope, these days, where “self-constructed fantasy dimensions that function as a cage from the pain of real life” have somehow become a dime-a-dozen common occurrence. Still, I think it works for Iroha’s arc in Magia Record. The show never needed to be a ground-breaking, transformative juggernaut or anything; it simply needed to tell a compelling tale with characters we’re interested in learning more about. It’s taken a lot longer to get to that point than I would have liked, but I think Magia Record is finally walking the walk.

I only have a few minor complaints. The first is that, after the all-out spectacle of the last two episodes, it is just a tad disappointing to have the show return to perfectly enjoyable but more middle-of-the-road presentation. The editing is also still off in places; the transition from the cold-open to the OP was especially jarring, and almost incomplete looking. I had to rewatch it a few times just to make sure that my Funimation app wasn’t bugging out.

Finally, while I’m not against having Kuroe along for the ride with Yachiyo, I’m still struggling to understand what purpose the character is serving in the grand scheme of things. She barely appeared in the first season at all, and so far she’s mostly been around in order to receive convenient exposition that other characters, like Yachiyo, need to catch up on later. Her scenes with Iroha are sweet, but I’m having a hard time pinning down what Kuroe’s relationship with Iroha is supposed to add to the story. Is she just meant to add a sympathetic face to the girls that defect to Magius? Or is it to give Iroha a reliable friend beyond Yachiyo?

Either way, these issues are small potatoes compared to how much I’ve been enjoying Magia Record these past few weeks. When Yachiyo and Iroha are able to greet each other in the real world and embrace at last, you really do feel the joy in their reunion, even though it’s functionally only been a couple of episodes that Iroha has been gone. Will Magia Record ever have the guts to just let these two obviously-more-than-friends kiss already? I won’t get my hopes up, but I will definitely continue to look forward to what the rest of this season has to offer.