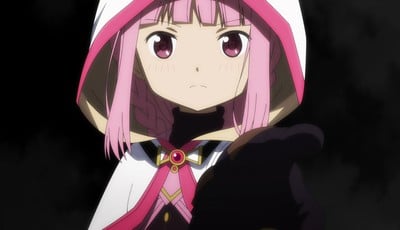 Here’s one of the key differences I’ve discovered over the years between the stories that are good, and everything else: The good ones know just when to tease out mysteries and plot developments, and when to provide satisfying answers and payoffs, such that the audience barely has to even ask “When are X, Y, and Z going to happen?” before the story starts to deliver. The ones that don’t work as well, on the other hand, will either waste time on questions and character details that are plainly not important enough to care about, or they won’t provide any resolution at all. This might seem like an obvious, “Writing 101” kind of a lesson, but you’d be surprised how often it seems like even very talented and professional writers have failed to take it to heart.

“Are You Okay With That?” is another great example of how the creative team behind Magia Record have continued to learn from the past mistakes of the muddled first season to create a Madoka Magica spinoff that is worthy of the name. Last week, some of my minor criticisms came from not understanding Kuroe’s role in the story, especially since she sticks out all the more on account of being an anime-original character, and what do you know? This week, Magia Record makes a decent case for her inclusion in the ensemble. I’ve also just generally been wondering how long this hunt for the Hotel Faint Hope was going to take, and if the original Madoka Gang would get to participate in the story before the very end of the season finale, or something. Once again, “Are You Okay With That?” has the courtesy to not waste any of our time! Iroha and Kuroe make it at least into the cavernous halls beneath the Magius HQ, wherein they are almost immediately confronted with a bunch of problems they need to solve, and we even get a check-in with Madoka and the others, who are trying to catch up on all of the Rumor and Doppel stuff that we’ve been swimming in for a season-and-a-half.

In other words, Magia Record feels like it has made more progress in the past few episodes than it felt like we got in most of the first season, and that snappy pacing has done wonders for the show’s entertainment value. Granted, there are some narrative cheats we have to just go ahead and accept in order to get there, the biggest one being Iroha’s sudden emotional attachment to her sister Ui’s hospital pals, Nemu and Touka. Now, the first season did establish how the two Magius ringleaders are intimately connected with Iroha’s long-lost little sister, but there was so much other crap going on at the time that it barely registered. Maybe I’m just forgetting an important line, or maybe the writers really are pulling the last-minute audible that I suspect they are.

Either way, when Iroha suddenly gets all worked up about meeting Nemu and Touka to work out whatever the hell Magius has planned, the show goes out of its way to mention multiple times that Iroha actually loved the two of them like sisters the whole time, because of how much time they spent together with Ui, and that she just forgot because of Wish Reasons and stuff. I don’t buy this, and I’m 90% certain that this is the very first time it’s been mentioned. If not, then it still speaks to a problem with Magia Record‘s writing, because that is the kind of meaningful connection to the core conflict of the story that shouldn’t be this easy to forget, you know?

Still, it gives Iroha a more active role in her own story, which is inarguably an improvement, especially since she needs to be able to make her way through the plot even if Yachiyo gets side-tracked with a big offscreen Twin Fight, or what have you. This might also be why I’m willing to go with Iroha and Kuroe’s swiftly blossoming friendship, even though it ought to feel very forced when you consider that, prior to last week, the two shared maybe a minute of screentime with each other. I don’t know if there will be more to Kuroe’s whole deal beyond the basic explanation she gives this week for joining up with Magius – which basically amounts to her being too “weak” to hunt the powerful witches of Kamihama City without Magius’ help – but it’s just enough to differentiate her relationship with Iroha from what Yachiyo already has going on. In the latter dynamic, Iroha serves as Yachiyo’s last and strongest link to her own humanity, whereas Iroha is the beacon of strength that Kuroe looks up to and relies on.

It’s nothing exceptionally grand or deep, but it is good enough to get me invested in Kuroe’s development. That’s more than can be said for Rena and Kaede, who I had forgotten so completely that I had to pause the episode and review my own reviews to jog my memory. Even after I remembered the whole gang of girls that Iroha teamed up with before the current gang of girls that she and Yachiyo are hunting after, it wasn’t like Rena and Kaede were the standout supporting characters of Season 1, so it’s curious that their relationship plays such a prominent role in this episode. It works as a foil for what Iroha and Kuroe have going on, I guess, since Kaede turning into an uncontrollable Doppel is the fate that awaits Kuroe if she can’t learn to blush and hold hands with the cute pink haired girl that wants instead to use the power of friend—er, “Connecting”.

Also, the fights between the Uwasa Security Guard and Doppel Kaede are very cool, so I can’t begrudge Magia Record for plucking a pair of girls from its overstuffed character pool and exploiting their emotional hangups for dramatic effect. It just strikes me as a teensy bit wasteful to set up all of these interesting plot threads—the search of Hotel Faint Hope, the quest to rescue the Villa crew, the presence of Madoka and Co.—only to get distracted by what feels like an optional side-quest and mini-boss fight. Then again, some of the lore stuff we learn while Iroha and Kuroe traipse around with Rena and Kaede is probably worth the detour, especially the discovery of Magius’ Witch Factory.

We’ve reached the point where the Madoka Magica franchise often feels like it is taking the truth of the Witches being former Magical Girls for granted, since it is a dark and genuinely horrifying idea that loses a lot of its power when the surreal mindscapes of Labyrinth become more about brand recognition than anything else. The Witch Factory is a killer twist on the series’ lore, though, and I hope the show does more with it, because it fundamentally changes Magius’ role in the story. Up until now, you can maybe have seen how the Black Feathers would come to the conclusion that any price is worth paying to avoid transforming into a Witch, but in “Are You Okay With That?”, we learn that Magius has been keeping Witches trapped so they can feast on the energy of captured civilians. That is supremely fucked up. I love it.

So, yeah, another week gone by, another kickass episode of Magia Record Season 2. I never thought I would see the day where I ended up looking forward to Magia Record even more than shows like To Your Eternity, but here we are. I feel like there has been a marked drop in engagement with the show this year, since hardly anyone seems to be discussing it online from what I’ve seen, and that’s a damned shame. I’m loving everything the show has been doing with this new batch of episodes, and I can’t wait to see where it goes next.