Home » Episode 17 – To Your Eternity
Anime

Episode 17 – To Your Eternity 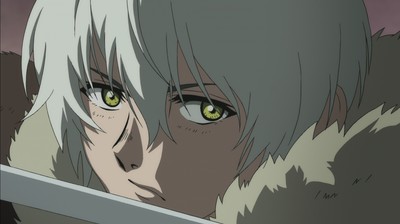 Another week, and another episode of To Your Eternity gone by where I am wishing so damned hard that we could all wake up in the alternate universe where the anime was able to have the cinema-level production values it so clearly deserves (and all without having to exploit the systematic abuse of animators and other entertainment industry workers to get there). Alas, we do not live in that universe, and in this one “The Defeated” is another chapter of the story that we’ll have to add to the pile labeled “Stuff That Was Probably Pretty Cool and Interesting Before It Got Animated.” So it goes.

To the episode’s credit, it gets a little better as it goes along, but boy is that first third rough. After one of the extended recaps that the show has clearly been using to pad out its runtime, we spend a full five or so minutes with Hayase as she turns her victory against Fushi into an opportunity to grab the attention of the entire arena so she can provide an impromptu speech that is half sermon and half rallying cry. She spews a bunch of nonsense about being the concerned caregiver that originally found and cared for the feral Fushi all those years back, and how she’s been desperately searching for him ever since. Now, Hayase is pleading for the people of Jananda to help her “protect” the Orb by forming a zealous army that she might command, and she even offers her rightful place as the island’s ruler to a Janandan citizen, none other than Tonari, as a gesture of goodwill.

At least, I think that sums up Hayase’s motivations well enough. The sequence is honestly a bit confusing to me, partially because it is so overlong and poorly directed, which made it hard to zero in on what exactly I was meant to be feeling the whole time, and also because Hayase’s motivations simply haven’t been well-communicated. She wants revenge for what Fushi and his companions did to her five years ago, obviously, but she’s also developed this weird and nebulous obsession with him…which apparently includes wanting to commit out-and-out rape on the unconscious immortal? The licking thing that Hayase started doing the moment she came back into the story was definitely a gross and off-putting red flag, but I didn’t think she’d get this gross.

And I must ask: To what end? Was the whole point of her giving Tonari the keys to the kingdom so she could manipulate Fushi into giving himself up in order to save the island kids? Is her goal really to try and procreate with him, or is the sexual fixation just borne from some messed-up need for Hayase to dominate Fushi? Is that the “something” that Fushi acknowledged that she wanted when he offered himself to her in exchange for Tonari and Co.? Is Hayase being genuine when she claims that Fushi deserves to be worshipped as a god, or what? Is the kids’ (and Pioran’s) escape from the island really going to go this smoothly, after all this time and build up? And at the end of the episode, when Tonari decided to abandon ship and head back to Jananda to rescue Fushi, what exactly is she expecting to accomplish, as one child against the machinations of a demonstrably insane warrior and her crew?

“The Defeated” simply has me asking too many questions, specifically the kind that comes from feeling as if the show has failed to communicate key facts about its characters and story, rather than the questions that naturally accompany being fully engaged in a compelling mystery or twist. I mean, yeah, I want Tonari and Fushi to make it out of Hayase’s (possibly rapey) clutches unscathed, but beyond that, I’d like to feel more confident in the direction that the story is headed, in general.

Also, again, I wouldn’t be so distracted by my questions and concerns if the episode’s plot of Fushi and the kids trying to outwit Hayase was more entertaining, but it’s hard to feel any genuine thrills or chills when the show just looks so awkward and sad most of the time. That’s the thing about the wonky visuals and clumsy pacing of the editing, too: “The Defeated” is just functional enough to get the story from Point A to B without falling apart completely, but there are so many little blemishes in nearly every frame of the episode that the whole show starts to feel like a woefully underprepared amateur that is suddenly fighting way outside of its weight class. It feels bad watching To Your Eternity during episodes like this, because both the show and the audience are keenly aware that things could have—and should have—been so much better than this.

It’s not a complete loss, I suppose. The stuff with Fushi trying to come to grips with his own fears and failures after he got knocked out was interesting, especially since I expected him to encounter visions of the dead friends that have come and gone, instead of the survivors he left behind. It’s also fun to get more glimpses of his powers’ capabilities, such as being able to hot-swap forms, like when he left his Boy husk behind and escaped Tonari’s men in the form of that shrew creature. Really, Fushi’s character development, and the fact that he’s getting into increasingly complicated and morally gray conflicts, is great!

A few enjoyable beats aren’t enough to salvage an entire episode, though, and I think that “The Defeated” ends up missing more often than it hits, unfortunately. There are only a few weeks left to go before the journey is done, now, and the show is already falling out of that “pretty good” groove that I was so happy to find it in just a week ago. Should we bother getting our hopes up for next week, or is this where we start to brace ourselves for the worst-case scenario, instead?