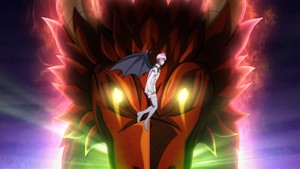 What’s the only thing more surprising than Purson coming to the rescue? Ronove coming to the rescue. I’d been wondering where he’d gotten to after the rest of Balam’s group dragged him along on their mission, and while we still don’t actually know that (my money’s on “behind something”), he reemerges at just the right time: when the giant composite monster is ready to destroy the shelter where most of the park visitors are. And wouldn’t you know, his Charm power is good for something beyond self-aggrandizement, too: it gets the beast to look at him, diverting the trajectory of its mana bomb.

What, Ronove didn’t really think that through? Yeah, that’s what he’s realizing now, too.

I can’t count how many times the action this week came to a head, to be honest. (Or rather, I can’t be bothered to count.) This is one seriously action-packed episode, and it really makes up for the monster battles feeling like they’ve been going on for one too many episodes. First we’ve got Azz-Azz and Sabnock fighting the carmine dragon, then Balam fighting the carmine dragon, then Opera, Balam, and Kalego fighting the composite beast that includes the carmine dragon, then Ronove showing up…it’s a lot. It could easily have been too much, but it works because the show treats each fight as the climactic battle. None of them feel lesser, because each display of power is impressive and we really get the sense that everyone is trying their absolute hardest to take down first the carmine dragon and then the composite magical beast. That none of them can is less a disappointment and more a statement of just how big a deal this whole thing is.

It also lets us know that Wetoto (and possibly Kiriwo) really had this planned out to the nth degree. We’ve now seen two separate contingency plans go into action: first all the defeated magic beasts combined into the composite one, and then the composite magic beast prepared to turn itself into a mana bomb to finish the job of destroying Walter Park. That says that the villains put more thought into this than we’d like to think, while also suggesting that even if Iruma somehow manages to get rid of the composite beast, they’ve probably got yet another plan ready to go into action. Maybe not this time, in this fight, but I very much doubt that they’ll all simply go away quietly if the Babylis gang stops them this time as well. Kiriwo is looking like the overarching Big Bad for the series, given that he’s come back from season one. Even if he’s not in the rest of season two, I don’t think we can write him off completely.

But in the meantime, we get to see so many people be awesome that it’s almost mind-boggling. Sabnock really gets the spotlight I think, because he shows that he’s more than just a muscular guy who always politely keeps his nipples covered. He’s not just spouting off about his ambition to be the demon king, either – when he takes Asmodeus to task about his willingness to just throw himself into danger for Iruma’s sake, his arguments are well-reasoned and make a lot of sense. If Azz is serious about wanting to be there for his best friend (crush?), that means he needs to actually stay alive, and just going off into an unwinnable battle because he’s all worked up and feeling competitive isn’t going to help him at all. Sabnock wants to defeat the carmine dragon as much as anyone, but more than that, he wants to fulfill his goal of becoming the demon king. There will be other monsters to fight, but he’s got to live if he wants to do so. That’s something that Asmodeus hasn’t thought about, and Sabnock is maybe only in front of Clara as “last person we’d expect sound advice from.” But like most of the other Misfits, there’s more to him than most people are willing to see.

That’s what makes Kalego’s relationship with Opera so interesting, because he plainly does not want to remember how formidable his senpai is. (Possibly out of self-preservation.) But Opera is so much more than a mild-mannered butler, or whatever their role in Sullivan’s household is; they’re the lynchpin of the whole fight. It’s Opera who figures out how to get Kalego there, Opera who, along with Ameri, shows up at the last minute to save the day, and even Opera who figures out where to go to save it. Kalego would like to forget all of that, possibly for trauma-related reasons, and I would hazard to say that his relationship with Opera influences how he treats his misfit students.

It looks like those misfits are going to have to save the day after all, though. Is next week the moment when someone figures out Alicred’s deal? Has Agares revealed his soft spot for children and will that continue? What is Ameri saying to Iruma during the preview and will he get it? So many questions, and one very long week to wait for answers.