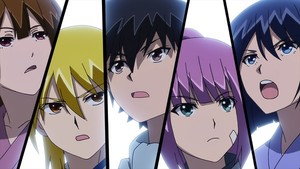 It feels only a little weird to describe this last episode of I’m Standing on 1,000,000 Lives‘ Jiffon Arc as a coda. The orc-slaying segment of the story was soundly wrapped up last week, with the sudden appearance of a dragon as mere background noise, and dealing with that thing proves to be more of a sidelong distraction for everyone involved until the story just kind of coasts to a close. There are revelations at this eleventh hour, sure, but they almost seem to be about setting up questions for future stories. Also present are elements that I think are supposed to be clarifications on this arc’s themes, but actually end up muddying things a bit. Either way, while it’s nice to be so solidly done with this storyline that was starting to overstay its welcome, I wonder if it couldn’t have done more to make this feel like a real victory lap.

There are several elements here that do work pretty well, especially within the confines of this single concluding episode. Its opening attempts to impart a last-minute rush of pathos for Thanza as he gets killed by the lava flow while protecting the boat, and the delivery pulls it off. A large part of that is how the writing ties in Thanza’s initial disregard for his homeland to the similar contempt we know Yuusuke holds for the people and places he’s been around. They don’t hammer it home immediately, letting us reflect on it ourselves before we see Yuusuke recognize it internally by the episode’s end, prompting more reflection on his values once back in the regular world, as has become the norm for this series’ structure.

The series-wide idea of shouldering the value of lives is also pointedly present in who’s ultimately revealed as the villain of this piece: Raji the Dragon Bishop, who we haven’t really seen before now. His role as an inciting antagonist in all the misfortunes that have befallen Jiffon can come off overplayed – which I’ll get to – but the framing does fit the high concept here. Whatever Raji’s motivations ultimately were, with relatively few actions on his part, he was able to steer the destiny of not only an entire community, but an entire culture of people towards annihilation to his own ends. Yes, he’s credited as a ‘prodigy’ that may have made it easier to enact his machinations, and one has to wonder if he had a benefactor in the form of a bigger bad out there in this world, but it’s overall still engaging as an illustration of how a villain can have as much of an impact on all these peoples’ lives as the heroes we’ve been following.

I like the broad strokes of that conceptual illustration more than what it does for the finer details of the story. Aside from seeming like more of a last-minute twist tying the plot together than it actually needed, I’m not sure making the collective issue befalling Jiffon’s culture actually the fault of this one guy does the commentary therein any favors. It ends up not being a parable about a group of people forgetting the formative reasons for their traditions only to be punished for their short-sighted hubris, but instead an illustration of how a self-serving schemer led them to near-ruin because…he was too smart for them to realize he was trying to screw them over? I wasn’t crazy about Million Lives‘ previous suggestion that the people of this island were the real bad guys and that their conflict exterminating the orcs was simply the result of cruel circumstance, but I also don’t know if turning around and tilting that all to be part of a grander Evil Plan instead is the best double-back.

It doesn’t help that everything about the Dragon Bishop plot point is left pretty open-ended for now. Torii actually thinks to ask about it upon completing the quest, but the Game Master’s answer, while pretty funny in its simple brevity, is almost as frustrating to us as it is for the characters in how little it explains. Raji himself just flies off after characters resolve the situation with only the most minimal of combat engagements with him, everyone seeming to forget about the direct conflict he instigated in favor of just being happy they finally made it to the end of this storyline. The writing itself doesn’t seem to totally forget him, thankfully, taking him out away from everyone else in a sudden reintroduction of that mysterious monster-rider from around the end of the first season, but for now that’s all shrouding of mysteries to be potentially followed up on in future arcs.

Million Lives is at least still as entertaining as ever throughout all this. The actual revelation of Raji’s villainous nature is pretty funny, especially since they count on the audience to recognize how he’s being shifty as hell before Yuusuke somewhat uncharacteristically fails to pick up on it. And it’s neat to see characters other than the Heroes be the ones to ultimately resolve the situation, specifically in seeing Yana and Katz take out those pesky magic circles with the incredible powers of cartography. Even the resolution of watching the Vaikedaamania festival occur as more of a wind-down act for everyone hits the right notes for finally reaching the end of this storyline. Bits like that, along with elements like Yuusuke reflecting on his worldview thanks to the sacrifices of the other mercenaries succeed in propelling the show’s tone and overall ideas forward. But I have to wonder if that couldn’t have been done better as a simpler style wrap-up, rather than trying to cram all these extra threads and revelations in at the last minute.

Episode 7 - My Next Life as a Villainess: All Routes Lead to Doom! X