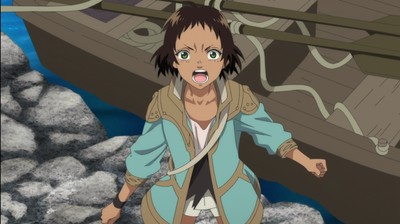 “To Continue On” could have been an instant classic episode of To Your Eternity. It should have been an instant classic. On paper, its story contains so many of the ingredients that could make for a thrilling, heartbreaking, and even downright terrifying climax of this Jananda Island Arc. Fushi is as fully realized an individual as he’s ever been, so when the Nokkers inevitably arrive to lay waste to the new friendships he’s made, he’s primed to feel that death and suffering like never before, far beyond the spikes of instinctual empathy that accompanied the death of The Boy and March. There’s even more complexity in this scenario than what came with Gugu’s tragic end; at least his death was a noble act of self-sacrifice, and it ended up saving Rean’s life. Here, in Jananda, you have a bunch of scrappy kids going up against a horde of unspeakable monsters, and they most definitely do not want to die. Fushi doesn’t just bear the emotional responsibility of being the reason the Nokkers are around and causing all of this destruction; in this case, he’s the person that Tonari’s crew put themselves in harm’s way in order to save.

If nothing else, it works as a great example of raising both the emotional and literal stakes of Fushi’s continuing adventure. Before, when people ended up dead on account of defending him or associating with him, Fushi wasn’t quite independent or self-aware enough to do anything but suffer the losses and add the lessons of each “stimulation” to his repertoire. When Tonari goes back to Jananda to fetch Fushi, the tragedy is that Fushi tried to do what he perceived was the right thing by sacrificing his own freedom for the sake of Tonari and the other kids. So, later on, when the kids run into the Nokker trap at the coliseum’s corpse pit, our Orby hero must learn the painful lesson that sometimes your best intentions will lead to ruin no matter what you do. People are messy, unpredictable, and they will act against their own self-preservation instincts to protect what they hold dear.

When Fushi stayed behind on Jananda, the weight of what he was doing didn’t really register, because Fushi fundamentally lacks the ability to fear his own death. Oopa is the first to die, her body getting stolen and puppeted by the Nokker vines, and Mia falls next when Oopa’s corpse runs her through with a spear. Uroy is the only one to get a “noble” death, as he is able to toss Mole!Fushi up to Lindgard so the animals can escape with Tonari and Sandel, and the big guy is even still smiling and waving goodbye when the Nokker’s claim him as their shell, too. Earlier, when the kids are trying to use Fushi’s powers to find a way to save Mia, Fushi collapses in anguish, admitting that, for all of the good his powers have done, he’s never been able to save anyone. This is how it always ends, with To Your Eternity once again reminding Fushi that, if he has nothing of himself to lose in this life besides his own memories, then the world will be perfectly happy to take everything from everyone he loves, instead.

With only a couple of episodes left in the season’s run, this could have been a perfect, if incredibly dark, note to begin closing the show out on. Fushi has made meager efforts to disassociate himself from others before, especially after Gugu died, but they were the efforts of a naïve and impressionable child. If Fushi is going to continue to live – and he literally has no choice but to do this – he will either have to find a way to cut himself off from other people entirely, or figure out how to bear the weight of all the death and suffering he is bound to experience over the course of his impossibly long life. Either option will take a great deal more strength and willpower than what Fushi currently possesses. In other words, this latest Nokker assault is a terribly perfect transition to the next phase of Fushi’s story. It should have worked so damned well.

Except, sad as I am to say, it didn’t. A big part of this has to do with the uneven writing of the Jananda Arc, especially where Tonari and the kids are concerned. I couldn’t even remember the kids’ names for this review, which tells you all you need to know about how memorable or well-developed they have been. Tonari, though, has gotten a fair amount of screen time, and much of “To Continue On” is devoted to trying to sell this bond between her and Fushi, since we can at least feel the impact of the kids’ deaths by way of how it affects the main characters of the arc. The problem is that, no matter how many flashbacks or melancholy monologues about her murderous dad that TYE throws at us, Tonari just isn’t a compelling enough candle. It feels unfair to compare her so directly to Fushi’s other influences, since she is serving a different purpose in the story than they did, but I just can’t get over how little I care about her compared to the likes of March, Parona, Pioran, or Gugu and the others from the brewery. Hell, I was more affected by The Boy’s story, and he died after just one episode; we never even learned his name, for Pete’s sake.

What really sucks, though, is the show still could have pulled this episode off, in spite of Fushi being stuck with such a relatively lame sidekick, because the Nokker attack is prime material for some grade-A body horror carnage. The whole notion of the Nokkers using spare parts from the corpse pit as weapons against Fushi and Co. is great on its own, but then the show goes out of its way to fucking brutally murder a trio of sad orphan kids, with Fushi and the audience being forced to watch it all go down. This is the exact kind of bloody spectacle that would be so easy to milk for some easy pathos and visceral shock, and not one person would blame TYE for taking advantage of such an easy win.

Once again, though, Masahiko Murata and Studio Brains Base have dropped the ball. Their rendering of what should be Fushi’s darkest moment is as flat and plodding as any of the Jananda Arc’s other disappointing action scenes. The Nokkers are utterly lacking in the primal colors and fleshy viscera that would make them into a truly horrifying monster to behold, and the violence done to both living and un-living bodies has no impact or weight whatsoever. I don’t know if these production problems are due to an overworked staff, a general lack of experience and/or skill, or the effects of the COVID pandemic. Hell, maybe it’s all three—either way, the result is the same: We have a story where a shapeshifting immortal and a ragtag group of kids are forced to battle to the death with a writhing mass of hateful, alien worm-monsters…and it’s all pretty boring to watch.

It breaks my heart to say this, but this final arc of To Your Eternity is some of the most disappointing television I’ve watched in a long time. In some ways, it might be better if the show was outright terrible from the start, or if the source material had never been more than mediocre fantasy pulp, because then the disappointment would simply come from having to watch a frustrating anime. There are plenty of those. Instead, what we have is an occasionally brilliant but lately baffling adaptation of a story that clearly has the potential to be a one-of-a-kind masterpiece. Is it too early to start hoping that another studio will get a shot to remake this thing here, soon?