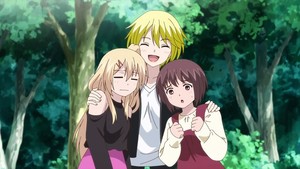 I gotta open up this week’s review by just reconfirming how much I do generally enjoy I’m Standing on 1,000,000 Lives It’s hardly the best show of the season, but I was pleasantly surprised by how invested I got while catching up to review this second cour, and even in the more middling episodes, I’m attached enough to the concepts and characters to be compelled to continue chewing through it. It’s definitely the highlight of my reviewing docket (I mean, have you seen the other stuff on my schedule?) and I’m glad to see it keep chugging along, doing its thing perfectly fine.

Case in point: this week’s episode has quite a bit going on, introducing the newest party member and sending the gang on their next quest, and it delivers all of it with shockingly strong efficiency. We can start with that new character, since the episode does: Glenda Carter is an (apparently) American videographer who expands Yuusuke’s world in ways apart from just her international origins. The big plot twist she brings along is that there are apparently multiple different groups of people from all over the globe going on quests in the fantasy world apart from our main crew, and members of several of them, along with Yuka, have been posting about it online. Glen’s interest in the broader scale of these events and communicating it to Yuusuke necessarily ups the stakes (with the seeming confirmation that those who fail to complete their quests in the other world end up dying in their own), and presents another wrinkle of motivation for the continuing quests of all these people. Glenda seems primarily pushed forward by her curiosity about the whole situation, coming along to uncover the questions that have been driving at Yuusuke, the others, and the audience so far. I like Glen for bringing some more pointedly grown-up sensibilities to the group dynamics of this adventure; she’s got a tone apart from all the other kids so far. She’s also surprisingly casual about her sexuality as a lesbian, which would be a more appreciable detail if it didn’t also encompass her remarking how eager she was to see a young girl grow up so she could try to score with her.

The information Glen brings in about the other international Hero parties is the inciting element of this episode’s first half. The making of a cheap movie reenactment of the gang’s adventures isn’t incredibly interesting save for a couple fun details (Yuusuke dressed as the Game Master!), but the corners of its creation allow for some insights we’ll be taking into the next quest proper. The big key is Iu understanding a bit more of what Yuusuke’s deal is as she (and us) get to observe him back in his hometown with his old friends. As had already been made apparent, Yuusuke’s misanthropic closed-off act is just that, an act, as he fears being cut off or hurt due to forging close bonds with any other people. But as Iu points out, what the group has gone through together has caused them to become connected whether they wanted to or not, to the point that she can pick up pretty effortlessly on Yuusuke’s strained efforts to maintain distance. There’s an element of both earnest care and pragmatism to her insistence that Yuusuke stop ‘being polite’, in that apart from easing any interpersonal tension, it would also allow the team to work more closely and potentially succeed more effectively at their quests.

The clear roots of this in Yuusuke’s self-worth issues lead the transition from the normal-world character and concept introductions to the party’s next quest in the isekai. I kind of saw it coming, but it was still definitely bittersweet to find out that Kahvel had passed in the time since the team was last in town. But my own wistfulness over the loss of the previous Best Girl is nothing compared to the guilt trip Yuusuke sends himself on. Even with the confirmation that Kahvel saw her time with the party as her “proudest accomplishment”, Yuusuke can’t help but feel guilty over the fact that he technically used someone for his own goals. Of course, it must be understood that interactions between people, even in accomplishing life-or-death quests, are a two-way street. And if Yuusuke’s flashback to Kahvel smooching him the last time they met is another awkward reminder of this show’s fixation on adults putting the moves on younger characters, it also reinforces for us how paramount the adventure was to Kahvel’s own overall actualization as a person (which was a whole other story we didn’t get to see). Yuusuke learning to see others as people in parallel apart from feeling he manipulated them would also fall under the purview of Iu’s “Don’t be polite” request, and as with so many other elements of this overall adventure, it begs the question of how much of this development is something the Game Master is trying to intentionally instill in him.

Like I said, there’s a lot going on in this episode of Million Lives, with the writing really stacking the deck for what I’m going to presume will be the last arc of this season. How all those concepts stand to intersect with the actual quest here – the party needing to somehow save the village of that young girl they come across – remains to be seen. But it’s frontloaded with a smattering of new world-building information that predictably complicates things more than they might expect from the straightforward-sounding goal. The time passed has seemingly given the environmental enemies an overall boost, scaling their levels even as our heroes have gotten stronger. But even as the world has changed, the potential for fulfillment in their roles still resonates with the heroes in a way that keeps the story’s tone feeling consistent. There’s a neat parallel in this one where the short film they make in the first half includes Kusue acting as a civilian recognizing the heroes, only for that scared little girl, Jezby, to recognize her as a hero once she’s actually in the isekai.

They might not feel like it, but these kids have grown through their exploits. This is evident not just in the more impressive job-classes they’ve acquired in leveling up, but in their actual fighting ability as well, with such maneuvers as Iu thinking to unequip her stuck sword during a fight and pull out her magic staff instead. The animation of Million Lives still isn’t great, but the presentation does work at selling little moments like Glen showing off in her debut by just beheading a goblin in a single stroke. This is the kind of place this series finds itself in where I can remind myself just why I generally enjoy the show so much: having solid fundamentals in setting up the higher themes it’ll be exploring, and tying that into arcs for characters old and new.