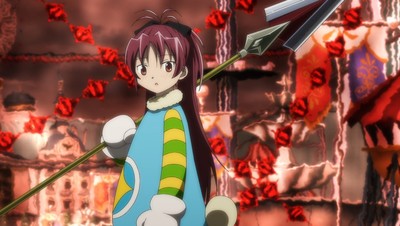 Oh dear. I was really hoping that this season’s shortened length might have helped prevent Magia Record from falling victim to the production woes that plague so many anime these days, but it seems like that was wishful thinking on my part. I always knew that there was only a slim chance that this season would be able to maintain the gorgeous standards set by its first episodes, but this isn’t just a step down in quality from previous weeks—it’s downright unfinished.

I’ve been singing the praises of this second season’s limited run, because it has meant that Magia Record can finally trim the fat and dispense with all of the time-wasting that marred its initial run. Even when you discount the episode’s other glaring issues, this is an area in which “This is Something Only I Can Do” backslides into the first season’s worst habits. Everything we see in this episode consists either of characters traveling from one place to another place, characters talking about stuff that the audience already knows, characters dealing with conflicts that don’t actually go anywhere this week, or some combination of the three. It’s not a terrible story, but table-setting rarely makes for the most compelling television.

Now, given the knots that Magia Record‘s plot was already twisted in at the start of Season 2, I can understand and even forgive an episode like this, which is one of the necessary evils that often crops up in a serialized story after the writers realize that the only way out of the corner that they’ve scripted themselves into is a lot of meandering and exposition. However, what might have been a merely “okay” episode of Magia Record is completely hobbled by an almost disastrous drop in production values. It isn’t even that the art itself looks particularly ugly or off-model. No, the biggest issues here lie almost entirely in the editing, and by extension, the stuff that never even got animated to begin with. In addition to the usual telltale signs of a rushed production—looped keyframes, lengthy camera pans over static images, repeated insert shots—there seem to be several cuts of animation that just plain never got finished.

By this, I mean that there are numerous instances where two sequences follow one another without any kind of transitionary shots to connect them. For example, there’s one shot near the end where Iroha sweeps her cape in front of her to catch some Black Feathers off guard; the cut of the rippling cape lasts a few seconds longer than it ought to, and then suddenly Iroha is horizontal and mid-air above her foes. Normally, there’d be some kind of visual indication of what Iroha was doing—a zoom-in of her feet pushing off the ground, a medium shot of her kicking into the air, something—but in this case, there’s just nothing but a hard cut from one image to the next.

If this kind of gaffe were limited to one or even just a couple of instances, it’d be easy enough to ignore, and many viewers probably wouldn’t even notice in the first place. The problem is that I was noticing weird editing hiccups like that in almost every scene, which had the cumulative effect of making the whole episode incredibly difficult to follow. There were other, even more obvious goofs that took me out of the show completely, too. Specifically, I counted at least two distinct sequences where characters were clearly speaking to each other, but no dialogue could be heard, and there wasn’t any indication that the scenes were intentionally put together that way.

And look: I get it. Making animation is impossibly challenging, even in the best of circumstances. Unfortunately, “the best of circumstances” for most anime studios still tends to mean that staff is overworked and underpaid to an almost criminal degree. I’m sure all of that hasn’t been made any better by the global pandemic that we’re all still struggling to deal with, even as the end of 2021 looms on the horizon. While I can’t speak to what specific factors specifically led to Magia Record having to settle on such a desperate and slapdash effort as this, I can tell you that it wasn’t very fun to watch. I can only hope that the season can recover in its final two episodes, and that it can do so without abusing the resources or the willpower of a studio that is clearly being pushed to its absolute limit as is.