Home » Episode 19 – To Your Eternity
Anime

Episode 19 – To Your Eternity 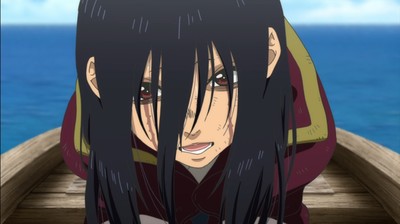 Something that I’ve come to realize over the years is that cynicism isn’t all that interesting, when you get right down to it. Cynical stories can feel exciting or refreshing in the immediate aftermath of experiencing them, especially if they are meant to stand in contrast of the less jaded or ironic examples that surround them, but their novelty often quickly wears thin. This shouldn’t be all that surprising, given that there is a simple emotional tax that comes with living in the heads of bitter, angry people for too long, but there’s another component that matters too, I think: Being cynical is easy, especially in a world when everything constantly feels like it is either actively on fire, or a mere spark away from bursting into flames. Writing a story that is filled with real, earnest hope is a much harder feat, and I think a more rewarding one in the long run.

To Your Eternity is not a cynical story, but this latest Jonanda Arc has been all about forcing Fushi to confront all of the things in the world that can make a person become hardened and selfish. As we see by the end of “Wandering Rage”, cynicism was the fulcrum around which Tonari’s character arc revolved. In a pointed moment of defying its own established pattern of storytelling, To Your Eternity allowed Tonari to escape her tragic demise (for now, at least), since her story was really all about learning to accept her home island and come back to it as its leader and protector. It’s a nice idea, and I can appreciate what TYE is trying to do with her story, and how it ended up impacting Fushi’s appreciation of his time on the island.

There’s just something about this ostensibly hopeful conclusion that doesn’t quite click with me, though. I think it has to do with Hayase. She is a character who I have come to like less and less with each passing episode since her reappearance, which is a shame since I honestly kind of love the core idea of her character arc. When we first met Tonari, she was an opportunist who knowingly took advantage of the myth of Oniguma to exploit March and Parona’s people, at least until she met Fushi. When she was finally confronted with a real force of godlike power, it broke her world and transformed her into a zealous convert.

That’s a really cool concept, which is what makes it so damned disappointing that it ends up translating to little more than turning Hayase into a barely coherent, maniacal sex pest. The way she tries to force Fushi into letting her handle the “sin” of killing feels too forced and abstract by half, and don’t even get me started on how her obsession eventually gets boiled down to begging Fushi to screw and then subsequently murder her. It’s just…too much, in a way that is neither interesting nor particularly entertaining.

It also doesn’t do much for Fushi’s character development, either, since his choice to abandon Hayase on that boat in the middle of nowhere feels less like an organic character beat and more like a convenient way to have Hayase get taken over the Nokkers. It really felt like there was a lot of buildup and pent-up rage that Fushi was meant to confront in Hayase, not to mention his own responsibility for the people who have died. I’m not arguing that TYE had to pay off that build up in a traditional way, or that it owes us anything, but I still can’t quite put my finger on what the story was going for, other than Fushi learning how to hate and fear certain people. I might also just be distracted by how the hell Hayase is even alive at all, since she bore the full brunt of a two-ton bear monster smashing her spine into the earth. Maybe that’s my problem: the fact that Hayase has transformed into a cartoonish supervillain in a story that ought to be above such cheap tricks.

Or maybe I’m just sad that we’re at the end of the most transformative storyline yet, and only one week away from the series finale, and I just don’t feel much of anything at all. Tonari was the weakest supporting character to date, and the whole Jonanda arc feels like a bunch of wasted potential. To Your Eternity continues to be perfectly average, maybe even a little bitter than average now that its visuals aren’t so crummy looking, but I think whatever spark that gave this anime life before might have been snuffed out before we reached the end. That’s a real shame. Maybe Fushi’s final adventure with Pioran will be great enough to restore the heartbreakingly hopeful story that TYE was before, but let’s not be too surprised if this one ends with more of a whimper than a bang.

Tsukipro the Animation 2 Anime Delayed Due to COVID-19 - News