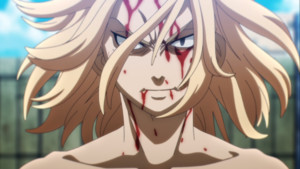 Without further ado, it’s time for the long-awaited Bloody Halloween. And I gotta say, after weeks of questionably paced buildup, it’s nice to have essentially 20 minutes of teenagers beating the snot (among other things) out of each other. There’s a little bit of wiggle room to fit in some backstories and a bit of character development, but the vast majority of “Turn Around” is pure violence and chaos as the Lord intended.

Unfortunately, the actual presentation of that violence leaves a lot to be desired. Revengers has never touted very impressive visuals, but it’s gotten by well enough with a few solid fight sequences and strong emotional narratives to back up its most important confrontations. Sadly, that’s not really an option here; so much of this episode is spent panning over still images, with impact effects or shaky cam applied to trick us into thinking they’re moving. It’s not enough to ruin this episode on its own, but it sure sucks a lot of the energy out of the fights we see. A huge brawl with 400+ fighters would be a tall ask from even the healthiest of TV anime productions, and that’s definitely not this show.

Still, there are some strong moments in here. Despite having no clue how to fight, Takemichi’s Shonen Protag energy carries him through several beatings and turns him into an unexpected inspiration to the rest of Toman’s foot soldiers. It’s a sweet moment that’s only slightly undercut by our hero waddling his way through enemies like a toddler trying to create an impenetrable wall of swinging punches. Revengers is fully dedicated to never letting its hero look cool, and I have to respect that.

You know who does get to look cool though? Draken. Once Takemichi lights a fire under the rest of Toman, the second-in-command is freed up from protecting his subordinates, and we get several minutes of both show and characters showing us just how god damn cool Draken is. He cracks skulls and breaks ribs and stomps countless Valhalla mooks into the dust before punching Hanma halfway across the junkyard with a single strike. It’s ridiculous, and while it does strain the credulity of these characters actually being human, it’s still very, very effective. While I appreciate the overall character writing of this show a lot, much like the Thorkell segments of Vinland Saga sometimes it’s nice to just take a break and watch a dude wail on some guys for a while.

Though, we do get a bit of character-building amid all this fracas, and I’m not entirely sure what to make of it. Kazutora continues to be my biggest gripe with this arc’s writing, as the bizarre thought processes that brought him to become Mikey’s enemy still just don’t work for me, emotionally speaking. We do at least learn more about why he thinks in such strange dichotomies: growing up with an abusive father and a mother who instilled in him that he must always pick a side. With that context, and his speech about becoming a “hero” by killing his enemy, I at least have a better idea of how he ticks, but as a villain for this arc he still feels undercooked, and I find myself waiting for Baji or Kisaki to throw their hat in the ring next episode.

Mikey at least looks cool as ever here, getting the best-looking fight of the episode as he takes on two of Kazutora’s underlings while barely breaking a sweat. Then once the fight turns dirty and they pin him down, he gets to show off his titanium skull, because that’s the only explanation for how he’s still conscious after Kazutora goes full Barry Bonds on his cranium. Then again this kid is able to kick two people across the face with one foot from a stock-still standing position, so it’s very possible he’s actually a robot designed to be the ultimate delinquent at this point. I’m looking forward to seeing just what this tiny ball of physical assault has in store next week, I’ll tell you that much.

All in all, this makes for a light (well, as light as hundreds of teens beating the piss out of each other can be) and quick episode, but also the exact kind of release Revengers needed after so much slow-burning. So while the animation certainly leaves something to be desired, it’s still ultimately a fun watch, and a much welcomed shot in the arm for this whole arc.