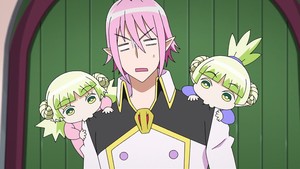 Growing up, we all had that one friend. You know the one – their house was always a complete case of culture shock for some reason, a mixture of the scarily unfamiliar and the thrillingly different, with weird food, strange family rituals, and just nothing being as you’d expect. (I’m actually told that my house was that place.) Well, Asmodeus and Iruma are about to discover that Clara is that friend, and I can’t think of anything that surprises me less. Of course, Iruma’s never been to a friend’s house before, so anything would have seemed exciting, but Azz-Azz is shocked that Clara actually lives in a house, so he’s in for a very surprising time.

Somehow I hadn’t quite realized that the Valac family yurt was in the middle of a strange forest, but it makes a lot of sense. After all, Clara’s a bit feral when compared to most of the other kids at school, so where else could she have grown up? It’s like a fairy tale woods co-written by Lewis Carroll and Dr. Seuss, full of nonsense and strange creatures, not the least of which is the Shabu-Shabu, a giant shark/pig/veggie hybrid that’s the magic forest equivalent of those ready-to-cook packages of ingredients you can buy at the grocery store. Just, you know, alive rather than wrapped in plastic. It’s also a joke that works on two levels, because its name is both a specific dish in Japanese cuisine and a portmanteau of the English word “shark” and the Japanese word for pig, “buta.” Really, it’s a terribly convenient monster, assuming you can kill it – it even comes with its own pot, which it uses as a shield.

“Convenient” is actually a pretty good word to describe the entire forest, although it may simply be that the Valac family has learned the skills required to thrive there. They refer to it as their supermarket, because pretty much everything you could possibly need grows there. I’m not sure how sanitary trees that grow meat are (this episode is so far from kosher), but by God, there are a ton of them growing different cuts and kinds. That this leads to a sort-of competition between Clara and Azz as to who can make Iruma a better meal is a lovely little show of both how much they adore him and how little their brains actually engage when they think about him, because let’s face it, Iruma has never, in the course of this series, met a meal he didn’t like. I also think he may be making up for thirteen years of never having enough to eat with his astounding appetite, so we can perhaps all agree that anyone who cooks for Iruma wins Azz and Clara’s little contest.

There is, of course, a wonderful juxtaposition between the Valac horde and poor Asmodeus. His family life may not be the most normal, either, but it’s normal to him and absolutely opposite to the barely-controlled chaos of the Valac household. It’s like his family times fifty – the mother is even more formidable, there are more and wilder siblings, and instead of a stately manor, the house is like a giant playroom. It’s all new to Iruma, too, but he thrives on new experiences at this point; Asmodeus is a little more staid. Naturally that means that the younger Valacs all want to be climbing on, playing with, and chewing Azz-Azz at all times; they’re basically the demon equivalents of my cat Big Al, who always makes a beeline for the one person who doesn’t like cats. At least he’s used to powerful moms.

While this episode could have been even wilder and zanier and gotten away with it, overall the visit to Chez Valac is pretty great. It certainly has fun playing with Asmodeus’ discomfort and the fact that Mommy absolutely knows which of the boys Clara has a crush on. It’s also a wonderful fairy tale reference that the family lives in a weird little house in the forest, because so many characters from folklore do – be they candy witches, funny little men, or a nice old couple who take in a child who came out of a fruit. In fact, Clara’s ability to put boys to sleep with the power of her lap and her singing may speak of a future as an evil fairy in a gender-flipped Sleeping Beauty story. She actually may want to work on perfecting that skill, because Ameri’s dad is en route to the Valac home and it looks like Clara and Azz-Azz are going to have to part with Iruma for a little while: it’s time for Ameri to take him up on that promise to go somewhere, just the two of them.