Home » Episode 2 – The Great Jahy Will Not Be Defeated!
Anime

Episode 2 – The Great Jahy Will Not Be Defeated! 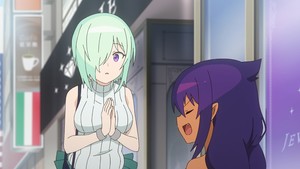 Episode 2, “Druj Asks No Questions!” opens with Jahy back in her lavish, bewinged glory before boomeranging us back to the present where Jahy is a tiny tot barely braving Japan’s annual heatwave. Yet that’s not going to stop her from hunting down another mana crystal, which is pretty much what she spends this episode doing.

What this leads to, of course, is a comedy of errors as Jahy attempts to get a new mana stone, which… goes as expected because Jahy is just honestly so down on her luck in this world of ours. We also get to meet Druj, a weapon’s craftsperson who also likes to be a chair. She’s definitely a masochist, which instantly endears me to her (mind you, my favorite KONOSUBA character is Darkness; don’t know what that says about me, but… moving on)

Druj is a pleasant addition to The Great Jahy, in large part because the dynamic that she has with her former overlord is flipped from the typical lord-servant relationship. Despite Jahy’s best efforts to obfuscate why she’s been reduced to a childlike form, it’s clear that Druj has a leg up. It’s only because Druj is a bit too trusting that Jahy’s child-like cover isn’t blown. This, of course, leads Jahy to puff out her chest and put up a front so she can keep Druj in the dark.

I have to admit: episode 2 is making me warm up to Jahy, which I didn’t expect to happen quite this soon. Then again, I also didn’t expect to like Don’t Toy with Me, Miss Nagatoro‘s Nagatoro and I actually did by the finale, so… maybe I’m just developing a fondness for tanned/dark-skinned girls with fangs and a good dollop of attitude? I don’t know. Whatever it was, the jokes hit better, in large part because Jahy wasn’t screaming at the screen for 80% of the episode. Instead, the bulk of episode 2’s humor flows naturally from the dissonance of having the once-powerful Jahy be at the mercy of Druj, who’s hilariously oblivious to her situation. It makes for some of the funniest moments in this episode.

Also hilarious was the scene with Jahy and the roomba, which honestly had me on the floor. There’s something intensely funny about Jahy not knowing about electronics and getting spooked by a roomba zipping around the room. Her ensuing admonishment of Druj’s weakness for electronics is equally as funny, because, once again, it highlights just how far Jahy has fallen from grace.

All in all, episode 2 is a step up from the very weak premiere, capturing that Sleepy Princess in the Demon Castle energy that I’ve been craving since Fall 2020 in the form of Jahy. If this is the direction the comedy is heading to moving forward, then I hope it swan-dives into a pool of this kind of energy because it’s knee-slappingly funny. When The Great Jahy is on, it’s on, even when it dips into sympathizing with Jahy, who continues to be a far cry from her former self. Better yet, the show seems to be leaning away from being out and out cruel, and is instead playing up Jahy’s fish out of water status, as well as her generally weakened state compared to her former self. (Also, they’re not doing a thing with her only wearing a shirt, which is a relief since I don’t have to talk about that… yet.)

I might not be fully convinced that Jahy is ultimately going to be a great series, but I definitely laughed a lot more during my watch of this episode, and even found myself earnestly rooting for Jahy to thrive and not just survive. There’s enough meat on the bone in episode 2 to convince me that Jahy has layers, and won’t just scream at me throughout this cour. That’s enough to get me on board with this show, and definitely makes me rethink some of my complaints in the premiere.