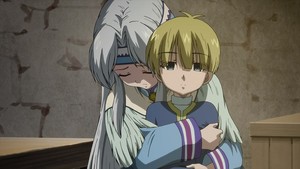 This episode of I’m Standing on 1,000,000 Lives is titled ‘The Journey of Death’, and if that sounds fairly intense, I can confirm for you that it really does come across as having that level of overt dramatization. This series has never been one to shy away from potentially heavy subjects, it is largely predicated on exploring the weight of human lives, after all. But the sheer amount of downright dour matters that get heaped on over the course of this episode in the name of continuing to define what this arc’s plot is going to be can feel like a bit much the way it’s all concentrated together. That doesn’t mean this episode of Million Lives is bad, but simply that you might want to strap in for things to get darker compared to some of the sillier antics the series has primed us with before.

A large part of this pointed presentation comes from how so much of the suffering is specifically piled onto Jezby, the adorable little guest-star for this story introduced last week. Her dad got taken over by a parasite known as a wireworm, so the Heroes have to decapitate and burn his corpse right in front of her. Then we learn that she had actually fled her village trying to find her exiled father in the first place, and when she returns, she’s informed that her mother passed away from illness! A large portion of the back half of the episode features Jezby in the background, silently clinging to her catatonic younger brother Lanan as the only thing she has left in the world, and that’s before she ends up being hauled off to apparently be executed by the village’s jerkwad leadership. Jezby is having a bad day, is what I’m trying to say, and if she weren’t also symbolic of the emotional core of what the Heroes were trying to do in this story, it might come off like too much a procession of tragedy porn. At least things can’t get any worse, right? Right?

The story of just how things ended up going so wrong for this poor little girl feeds into the quest our main characters have been assigned and thus, ostensibly, whatever lessons they’ll end up needing to take away from the whole experience. Those rigid rules that exiled Jezby’s father and led to her own apprehension are supposedly in place due to the village of Zagroth adhering to that old storytelling setup of a lack of resources forcing a hard limit on the amount of citizens that can be counted among the place’s census. In more neutral circumstances this would be a base concept on its own that the objectives of Million Lives could reckon with: Is it better to sacrifice a few lives for the sake of the remaining many living in a situation? But the writing felt that was either too simple or merely lacking in narrative thrust, so at least in terms of moral alignment, a ‘correct’ side for the Heroes to take is presented relatively quickly in this episode, with the village elder Cox clearly utilizing the resource-minding exiles as a tool for power and control as much as social economics.

As with the early episodes of so many Million Lives plots that have come before, the Heroes are as much driven by figuring out what completing their quest actually entails as they are by finishing the quest itself. In this context, what constitutes preventing the village of Zagroth from being ‘destroyed’, and how much will the characters need to reckon with whether that’s a worthwhile goal in the first place? Glen and her more grown-up, worldly perspective put in some work cementing her addition to the team, as she’s able to have a fairly measured conversation with Yuusuke on why the people of the village would cling to the increasingly-hostile place so tightly. The point forms an interesting parallel with the Jiffon arc we just got through; In that one, it was a given that the residents of the island still had potential in living there, and only needed to clear the hostilities that had waylaid them from being able to maintain the traditions that made thriving in that environment possible. But in the case of Zagroth, the march of time and escalating power of the surrounding monsters makes even adapting to continue eking out a living seem continuously less feasible. At this point, its structures seem to exist only to allow the central group in power a life of comfort while those they enforce their will on suffer.

Glen’s points about the village clock clearly with Yuusuke and his own experiences of not being able to escape the inertia of living in a struggling rural area, of clinging to a place tightly despite its time clearly passing and disregarding your own meager efforts at existence. I’m hoping that this intersection will allow some more clear-cut explications on Yuusuke’s past that we still haven’t fully seen, as those should be instrumental in the strides he’s clearly so close to making in fully overcoming his own cynical misanthropy. It’s another element that Glen’s presence is helping him overcome, with her (as well as Kusue at one point) serving to remind him what maintaining empathy even in the face of all this game-based plot-mandated misery can look like. Simply participating with these people has chipped away at his antisocial tendencies, and now Yuusuke is even recognizing their individual impressions on a worldview he’s reminding himself he should try to turn around. Figuring out that it’s wholly the people of this village, rather than the village itself, which need to be preserved, could be the final hurdle Yuusuke needs to clear to uncompromisingly want to do the same for the futurely doomed Tokyo.

So you see, even with a somewhat meandering pace introducing all the elements that will be at play with this conflict Million Lives is setting up, it still satisfied me by giving me a lot to mull over as it brought in each component. The more downtime-dialogue-based delivery of everything also means I don’t stand to be too distracted by the visuals this go-around (somewhat awkward fight with Jezby’s parasite-possessed dad at the beginning notwithstanding). There are still some elements to the setup that feel forced on the part of the main characters going along with them to keep the tension up, with Yuusuke and Glen falling way too easily for Cox’s Cask of Amontillado scam, or the way all the other Heroes but Iu take his later invitation at face value only to find themselves dangling off a bridge. This guy’s a scummy landlord, not someone I yet easily buy as a villainous mastermind. But perhaps that’s supposed to drive home the learning curve of our Heroes now questing against the most evil monster of all: Man! Even with those clunky plot beats or the sheer amount of overt misery it seems to be piling on in this one, I have to give Million Lives credit for continuously keeping me interested in where it’s going.