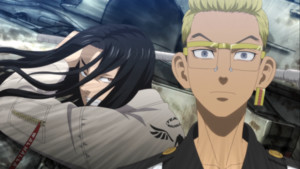 There’s an old canard about shonen anime pacing that says you’re only allowed to have one thing happen per episode. That’s obviously an exaggeration, borne out of equal parts frustration or good-natured ribbing, but it’s also not entirely wrong. There are certainly some shonen battle series that, at least in some places, feel like they were stretched past the breaking point to fill out an ever-increasing episode count, at the expense of any tension or narrative momentum. That’s not quite the case for this episode of Revengers, but only because two things happen across these 20-odd minutes.

The rest is, unfortunately, a lot of padding. We get the requisite two-minute recap of last episode, followed by an extended sequence of Takemichi tripping ass over teakettle as he tries and fails to accomplish much of anything. I’ve joked before about just how ineffective our hero is in a fight, but this arc’s pacing has exacerbated that past “funny, interesting twist on the hotblooded shonen hero” into “aggravating and redundant use of screentime” by now. The previous arc showed Takemichi can absolutely be an engaging protagonist, but as this story’s conflict has gotten more complicated and the emotional center of the narrative has strayed away from him, he’s felt more and more like a hapless bystander reacting to a story he has no part in. Even here, when he’s supposed to be making a critical difference in this fateful battle, the most he accomplishes is helping Baji bleed out a few minutes later than originally scheduled. Heck, he even forgets which K-named villain is supposed to stab Baji in the first place, and even winds up inadvertently holding him still to set the guy up for the attack. The more I think about it the more it feels like Takemichi shouldn’t be here.

Speaking of Kazutora, he continues to be a mess of an antagonist. I said last week that I at least understood the logic of his actions, even if the underlying motivation was shaky from a writing perspective. That goes out the window this episode, as instead of taking out Baji in the heat of battle, Kazutora just kind of shows up and stabs him for no apparent reason, muttering that it’s Baji’s fault the same way he blames Mikey. The generous reading here is that Kazutora is being manipulated by Kisaki – because who isn’t at this point – and is just incapable of accepting the guilt he feels towards all the lives his destroyed in the past, but if that’s the case the show is waiting a very long time to flesh that idea out. As-is, Kazutora feels like a crazy-eyed plot device with a knife taped to his hand, ping-ponging around to cause chaos and conflict without any discernible goal. In an already cluttered arc, he feels especially flimsy.

Thankfully, Revengers still knows how to keep things simple when it comes to Baji. He’s been conspicuously absent during this whole brawl, and it’s because he was biding his time for the chance to wail on Kisaki’s skull. Unfortunately this show takes place in a universe where skulls are made of vibranium and metal pipes have the cushioning power of styrofoam, so this killshot only serves to knock off the mastermind’s gaudy glasses. But Baji’s not one to be deterred, so after an awkward hug from Takemichi and an awkward-er stabbing from Kazutora, he steamrolls his way through the entire Moebius sect of Toman and stands one cool line away from stabbing the guy through his throat. It’s a little deflated by him finally succumbing to that shanking before he pulls it off, but as the latest in a parade of Look How Cool This Guy Is moments, it does a good job.

That’s still not enough to save this episode from feeling thin, sadly. The worst culprit is probably the section after Baji brains Kisaki, where he, Takemichi, and Chifuyu loudly argue about the conspiracy the evil nerd has been setting up behind the scenes. In a fight that should feel chaotic and tense, it’s a staggeringly long time to have characters standing around, inexplicably isolated from any other fighters, that begs the question of where everyone else is that nobody notices or reacts to this minutes-long discussion. In a way it’s a microcosm of this arc and episode’s biggest issues, taking an inordinate amount of time to accomplish little and reiterate things we’ve already firmly established. With the season end on the horizon, I’m really hoping Revengers can get its footing back, because this is just a wreck.

Shirtless Eren Gets an Official Figure