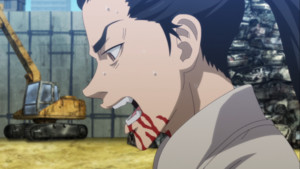 I’ve made a lot of noise the past few weeks about how ancillary Takemichi has been for so much of this arc. As our perspective character he’s been present for seemingly every important event, but has had shockingly little effect on anything that’s happened, as other characters with far deeper connections to Kazutora, Baji, and Mikey have done the heavy lifting. That doesn’t have to be a bad thing though – the members of Toman are all interesting and compelling personalities in their own right, and I’m all for stories being able to branch outside of a singular protagonist.

The issue comes when, to accommodate this, Takemichi has to be written with an undiagnosed case of short-term amnesia, forgetting important established details and fumbling over himself for episodes on end to prevent him from getting in the way of the plot. Failure can be just as potent a storytelling device as success, and there’s plenty of emotion to be mined from our hero making mistakes, but if those mistakes don’t feel organic it either neuters our main character or makes the story feel too contrived to resonate. That’s been the biggest problem with this entire arc so far, and while it’s still present through much of “One and Only” we do at least finally get to see the point of all this languidly paced chaos.

Though that doesn’t mean it isn’t still the wrong kind of excruciating to see Takmichi stand, stock still and slack-jawed, as everything goes to hell and begins following the terrible timeline he’s spent this arc trying to prevent. Yes, he’s a limp noodle of a fighter with no chance of taking out Kisaki or stopping Mikey on his own, but you’d hope he would do something, anything besides standing in place and internally agonizing over how he hasn’t been able to change anything. Takemichi learning to face confrontation head-on was a key part of his development through the first half of this season, but even that seems to have been forgotten in order to keep him from being too active in this story.

I suppose I should give him some retroactive credit – it turns out he did actively change things by getting that knife out of Baji’s back quicker than the original timeline, which buys the real star of this episode some precious minutes of life. And while Baji getting up from death’s door for the sole purpose of gutting himself and stealing Kazutora’s kill is silly as all get-out, it’s also the exact over-the-top cheese that’s been largely missing from recent episodes. There is a primal, inextricable part of me that will always cheer when a character does something self-sacrificial for their friends, and even as I consider Kazutora not really worth it, I have to admire Baji’s dedication. He won’t let his friend become his killer, nor will he let his other friend destroy himself for vengeance. If there’s any “good” way to go out in a convoluted gang war, that’s probably the closest you can get.

And that sacrifice finally spurs our hero to step into the fray and even take some blows from Mikey to put an end to this. Again, it’s cheesy as hell that what stops the mayhem is a friendship charm that Takemichi just so happened to pick up on a whim, but it’s at last a moment that nobody else could have achieved in this story. Takemichi is the only person not buried up to his neck in the muck and damage of Toman’s founders, and that outside perspective – and his determination to stand in the way of more pointless bloodshed – allows him to snap Mikey and the others out of their anger long enough to recognize Baji’s final wishes. We’ll have to see how this all proceeds, but I have to imagine any fighting against Kazutora specifically is finished.

It’s about as strong a (presumed) conclusion as I could hope for from this messy story, and while a good ending can’t retroactively make past weeks more compelling, it at least keeps Bloody Halloween from feeling totally aimless. There’s certain to be fallout, probably some schemes from Kisaki, and some other twists thrown in before this season concludes, and here’s hoping that allows Revengers to pick itself back up before it wraps up.

Episode 20 - To Your Eternity