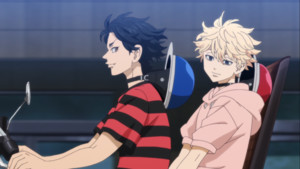 Well it took longer than it probably should have, but Bloody Halloween has come to its ultimate conclusion. Despite his worst efforts, Takemichi has succeeded in nudging the timeline away from Kisaki’s Machiavellian scheming, and now all that’s left is to clean up the blood, cremate the body, and write up Kazutora’s arrest warrant. There’s assuredly going to be more fallout in the overall time travel plot next week, but for now Revengers sees fit to eulogize the late Baji with a pair of reminiscing flashbacks courtesy of the people who knew him best.

The first half is honestly a little slight, though ultimately a decent dramatic coda to really knock it home that everyone in Toman loved Baji and his belligerent but kind-hearted nature. Mostly I just like seeing the founders hanging out as little(r) kids again, and the reveal that Toman was originally Baji’s idea to justify them all protective Kazutora is a bittersweet bit of irony. Meanwhile Chifuyu’s flashback is just some nice character building, again emphasizing that Baji was a good guy and even had some weird quirks, like throwing himself into studying so as not to disappoint his mom by getting held back a second time. The fact that this 13-year-old was strong enough to punch a man into a concrete wall and leave an impact crater strains credulity, but at this point Revengers has established its fights run on Power Rangers logic, so sure. These stories aren’t bad on their own or together, but they do wind up feeling awkward having to emotionally resolve this conflict.

Really, my biggest complaint about these stories isn’t anything to do with the flashbacks themselves. Rather, the problem is with the fact that we’re seeing them now, rather than at any point before Baji was succumbing to rigor mortis. Baji has turned out to be the pivotal character in this entire arc; he does the coolest stuff, is the most active both before and during the fight, and of course his death is the crescendo of the entire story. Having a firmer grasp on his personality and relationship to the rest of the cast would have gone a long way to giving the last episode more impact, and his final words to Chifuyu only make sense after seeing how they first met. My best guess is the show figured giving Baji that much focus beforehand would make it too obvious he was doomed to die, but then the time travel shenanigans spoiled that months ago. Honestly I’d have preferred that if it meant getting a better understanding of our temporary hero before he got corpsed.

But even if this moment in the narrative doesn’t carry much weight for me, it certainly does for the cast. Baji’s charm triggering the memory of Toman’s true founding is a genuinely sweet moment, and it’s enough to remind Mikey that he didn’t start this gang just to turn ugly faces into bad salsa, so even if Kazutora is a royal fuckup he’s still part of that little family they formed then. I’ve said more than enough on why Kazutora just doesn’t work for me as a character, so I can’t say his ultimate resolution did much for me. It’s nice that he finally takes responsibility for his actions, and it’s bittersweet that Mikey ultimately chooses to forgive him despite it all, but it feels like rearranging the chairs at a party that already ended. I can at least appreciate some of the execution though – Draken intuiting Kazutora’s suicidal intentions and telling him to live is some good character writing. It’s the kind I wish we’d seen more of across this whole story, really.

Thus ends Bloody Halloween, and I think it’s fair to call this one a mess. It has at least managed to flesh out some of our central delinquent characters and delivered a few solid moments in isolation, but troubled production and interminable pacing managed to make this feel like much more of a slog than necessary. More than anything, it feels like the show stumbling as it tries to broaden its scope outside of our protagonist, and in doing so kind of forgets what made its first story arcs resonate. Mikey and Baji and Draken are all cool, and undeniably fun to follow in a lot of situations, but they’re just not capable substitutes for the heartfelt and personal drama Takemichi’s initial character development delivered. With this extended tragedy over with, I’m hoping Revengers can get back to what made it feel special before it wraps up for the season.