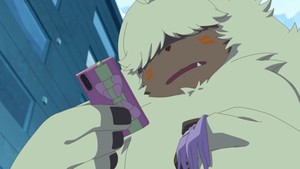 After doing such a good job of establishing our main duo’s dynamic across the first two episodes, I give Digimon Ghost Game a lot of credit in shifting the focus and basically having them act as supporting roles for most of this episode.

In exchange, the side character Ruri, who the show has been subtly setting up as a curious connection to these ghost stories in the background, ends up being our main POV character with a plotline extensively set up as a means of introducing her into the main cast rotation. We’ve already gotten shades of her personality before. She seems to be a very nosy and outgoing kid with a very curious mind that can be dangerous in this kind of story that focuses on horror and the supernatural. This time, we get the chance to see her in a much more vulnerable light right out the gate, which I would argue was a good call. Actually sitting with her through such a frightening experience made it a lot easier to connect with her as a character. Ruri was close to being turned into a damsel in distress, but she managed to come into her own by the end and even helped our previous leads escape their own predicament that they weren’t prepared for. I’m very curious to see how she interacts with Hiro and Gammamon for the rest of the series since they both seem to have contrasting personalities.

The timing of all of this is once again a little convenient. I think it would’ve been interesting Ruri’s active pursuit of these ghost stories is what led Angoramon to attach himself to her. However, the actual reason for why he originally started following her around and took up the role of protecting her is actually really sweet, and I buy them as partners by the end of this episode. Speaking of, I do appreciate the series catching me off guard in those final moments where the Digimon that they ended up beating is not only very much still around, but also vows to continue causing mayhem. Could this be the beginning of a small arc, or is it just a gotcha moment for the episode to end on? We’ll have to wait until next week to find out!