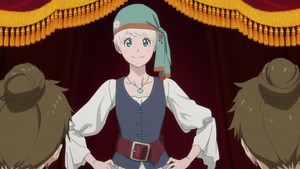 For every 18th century submarine, there’s a piece of history that Fena: Pirate Princess gets a little more right. I kind of like that, because it means that the series is taking its “alternative 18th century” premise more seriously than some aspects would suggest. Take, for example, the leader of the lady pirates – her name is “O’Malley,” which is a clear reference to legendary Irish leader Grace O’Malley, or Gráinne Ní Mháille if you prefer her Irish name. While we could debate whether Grace was a pirate or a privateer, because the English were not good to the Irish, it’s harder to argue with the show positioning her as a strong captain, because that’s who she was. Having her working with English officer Abel is a bit less great, because although real-life Grace did meet successfully with Queen Elizabeth I, it’d be a little much to suggest that they were truly friendly. Of course, we don’t know what (besides sex) O’Malley is getting out of her arrangement with Abel, so it’s maybe too early to make that statement.

Incidentally, I’ll eat my hat if Abel turns out not to be Fena’s older brother or cousin or some other relation. Even disregarding the Anime Law of Hair Color (which states that two characters with the same unusual hair color must be related) and his matching locket, he’s going through quite a bit to get her back, even working with pirates and a skeezy guy from the brothel where Fena was held essentially captive. That does beg the question of whether or not Abel knew she was there all along; it doesn’t necessarily seem like the Goblin Knights knew – although their leader might have – and with the advertising that the brothel would have done in order to get the best price for Fena’s virginity, it’s not inconceivable that everyone would have found out where she was at the same time. I sincerely hope that’s the case, because otherwise they’d have all left her there for “safe keeping,” which would make sense at a convent, but not a brothel, because merely being associated with sex work in the 18th century would destroy a woman’s reputation beyond repair. (Incidentally, this would be why no one even tried to rescue the other women; Fena they knew was still a virgin, but the others would have been considered soiled beyond redemption. Gross, but just another reason why we should be glad things have changed.)

The point of this episode seems to be mostly to show us that just because Fena has escaped and is now with people who want to protect her, she’s certainly not truly safe. It’s something that the twins are at least tangentially aware of, because they quickly note how her unusual hair makes her stand out far too much in the “free town” (think places like pirate haven Madagascar or pre-earthquake Port Royal, with minimum law enforcement). They’re also smart enough not to just let Fena go off on her own to find new clothes, perhaps recognizing a kindred spirit for whom rules are more suggestions. But the implication that Abel and the leader of Goblin Island are in communication is worrisome – we may not know it for a fact, but the scattering of white feathers around the one before the other receives a message via pigeon is suggestive. Is Abel playing both sides? O’Malley’s crew doesn’t seem all that invested in Fena staying safe as they go after her friends, although Abel may not be aware of that; it also seems possible that O’Malley is using him for her own purposes. But then there’s that kid with the shaggy hair, the one who pitches the brothel guard overboard all chained up – that’s almost certainly the right thing to do with the repulsive man, but why was Abel and/or O’Malley working with him in the first place? The fact that the kid refers to Fena as “alba regina” (“white queen,” although I think it should technically be “regina alba,” assuming my dyslexia isn’t reading the subtitles for me again) feels like more than a throwaway line.

There’s clearly a lot more going on here than a girl and her crew setting out to discover the truth about a square of clear stone. And since Yukimaru doesn’t smack Fena once this episode, and even has a cute blushy moment, I’m feeling more excited than before to find out how all of the plot threads will weave together. It may not be perfect (not all women talk incessantly, writers), but it’s definitely moving in the right direction.