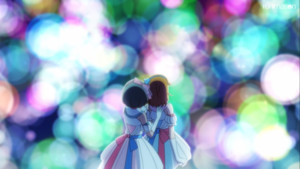 It’s been a difficult three weeks. Now yes, one might say we went six whole months without any Love Live! animation just earlier this year, but that was an expected drought. We knew to brace for it and ration what scraps we had to hold us over through the winter of discontent. But NHK-E gave us a taste, the lightest flavor of panacea to grace our palates, before leaving us to eat our own stomachs while they played live feeds of athletes doing One Piece poses and ska covers of anime OPs for a fortnight. Finally though, the anime gods have taken me by the hand and led me out of perdition, to bathe in the light of Living Love. For that, we give our thanks and pray.

Time may have crept along at a snail’s pace in the real world, but in the Love Liverse it sped right along, leaving Kanon and Keke with a scant few days left to prepare for their upcoming idol debut. Unfortunately the pendulum has swung back hard after Kanon’s momentary singing breakthrough, and she spends most of this episode trying to get herself together again. That’s easier said than done, and not made any more attainable by both her coach and partner getting into a whole mess of shenanigans while they’re supposed to be prepping. Thankfully for me, these are classic Love Live! hijinks, slathered in goofy faces and gags galore. Keke especially is channeling some intense Looney Toons energy, flitting through the background with chaotic comedic timing and infectious adoration for her partner in idolatry.

That said, Love Live! has always done a good job of balancing goofiness with sentiment, and among all the photo shoots and silly signs, we see Kanon’s self-doubts simmer until they boil over. Keke is a bit quieter about her insecurities, but there are clear hints that she’s wavering too, even before she starts to lose it on stage. I’m very curious what her off-screen phone call with her sister entails, and I’m sure that’ll come back later on. But all of those fears and doubts fall away in easily the most touching moment in Superstar!! so far, as these girls are able to be honest with each other, and find strength through it. Also don’t think I didn’t notice Keke’s line about Kanon “stealing [her] heart”, show. It’s not quite up to Ayumu and Yuu’s Idol Proposal in Nijigasaki, but I see what y’all are doing.

Then there’s the big performance, the first of its kind for this season, and from a writing perspective it may just be the best concert sequence Love Live! has had since Honoka, Kotori, and Umi performed for an empty auditorium nearly a decade ago. The setup is cheesy as all hell, between Sumire accidentally knocking out the lights and setting up Chi-chan for her light saber assist, but it’s delivered with the series’ trademark 11 out of 10 sincerity and leaps right over feeling corny to being sublime. The song itself is solid, the choreography is fun while staying believably simple for newbie performers, and the animation is all around another fantastic blending of 2D and 3D elements that looks about as seamless as anything I’ve seen from a TV production.

But the most important thing is just seeing Kanon and Keke actually doing it, even as they’re scared and uncertain and likely to lose to the last-minute entry of a big name idol duo. Despite all of that, they’re able to throw themselves into their performance for each other. In the same way a shonen battle series punctuates character arcs with explosive punches or energy beams, Superstar!! makes this climactic song and dance work because it’s a moving achievement in these girls’ stories. The show keeps up the pretense that this might still be the end of their School Idol ambitions (Spoilers: it won’t be) but it’s obvious that no amount of bureaucratic red tape will stop KuuKaa (Name Pending) from making each other’s dreams come true.

I’d be glad to have even a mediocre episode of Superstar!! after so long without, but thankfully the series is still firing on all cylinders and looks ready to properly introduce more of our cast next week. We’ve gotten very little out of Sumire so far, but she’s made the most out of her limited screentime and has me very excited to see this season’s potential Scumbag Idol make her formal debut.