Episode 3 – My Senpai Is Annoying 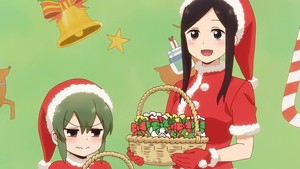 This week’s episode was definitely a step back compared to the first two in terms of comedy and variety. However, and maybe it’s just the general Christmas spirit, I still found myself walking away mostly satisfied with what I came here for.

There’s only one prevailing plot thread throughout this episode, and that’s whether or not Futaba can work up the courage to give a Christmas present to her senpai as a thank you for all the hard work that he’s put into looking out for her (and also maybe a subtle romantic gesture). Because of this, the titular senpai is actually fairly absent throughout the majority of the episode; instead, the focus is on Futaba interacting with others, who all try to subtly nudge her in the right direction. Everyone knows what she wants to do, even if she may be in denial about it herself. You really do get a sense that Futaba is being looked after by everybody, whether it be her friends or coworkers, and even though she is very easy to tease due to her lack of experience, they all want her to succeed. So while this episode might have only focused on one plot point, I like the sense of community that was highlighted here, and the final joke was admittedly a satisfying enough payoff for what felt like an entire episode worth of build-up. It wasn’t what I was expecting at all, and actually felt really cute.

Finally, I will say that the plot revolving around Sakurai and Kazama, two of Futaba’s coworkers, slowly getting closer together is really nice. They are obviously interested in each other, but it’s just a matter of letting the dynamic play out naturally. I do wonder if they were inserted here as a means of counteracting the lack of romantic development from our two main leads, but I digress. I’m hoping for a bit more next week, but that doesn’t mean I walked away from this with any less of a smile on my face.

My Senpai Is Annoying is currently streaming on
Funimation.