Home » Episode 3 – The Great Jahy Will Not Be Defeated!
Anime

Episode 3 – The Great Jahy Will Not Be Defeated! 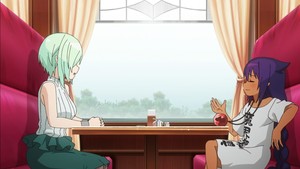 Episode 3, “The Great Jahy Can’t Brag,” opens with our once noble, beautiful, and great Jahy in her prime… then it kicks us right into the present with this pitiful overlord at her izakaya job: a job which she’s really starting to question because it takes away from her ability to find more mana crystals. It doesn’t help that Druj is just swimming in crystals: thankfully, she’s so loyal to Jahy that she’s more than willing to offer them up to her. It helps her cope with trying to be an adult in this mysterious, distant world. And that’s the meat of the episode: Jahy trying to adult while also searching for another mana crystal, which is essentially The Great Jahy Will Not Be Defeated!‘s “monster of the week”-esque plot. Yet there’s some good nuggets of plot and character building tucked into episode 3, even though most of this episode is Jahy foibles. That’s, of course, where I wanna spend my time.

In the premiere, Jahy felt like a screaming child, and while she still gets a bit screechy when she’s angry, the show is leaning less on her child form and more on just how much of an actual disaster Jahy really is. This, specifically, is what made me like episode 3, largely because now, we’re combining Jahy’s disaster of a life with the simple fact that she’s starting to adapt to the human realm/Earth, and the dissonance of a demon living in a very mundane society. It makes for really funny, faux dramatic moments where Druj assumes something magical has happened, Jahy riffs on that, and reveals that, of course, it was something absolutely mundane. This change is immediately endearing, and really has me in Jahy’s corner. She’s so utterly pitiful that I… kinda can’t help but root for her.

It helps that Jahy’s continuing to put on this facade of being secretly in-control of everything, to the extent that she lies about owning the izakaya. It’s one more layer to Jahy that moves her further away from the character we saw in the premiere to a character who is barely holding it all together. Combined with Druj’s overprotectiveness of Jahy… this is a pretty darn good bit of character growth. 10 points for Jahy!

If episode 2 was an improvement, then episode 3 is… honestly just as funny, even if it doesn’t do much plot-wise. It’s filled with lots of little moments that endear me to Jahy, who’s feeling more like an actual character and not a caricature. I continue to really enjoy her back and forth tit-for-tat with Druj, who is absolutely this series’ best girl. I hope that we get plenty of Druj and Jahy scenes, though I fully expect the show to grow into an ensemble cast, especially since it’s two-cour. Still, if the show remains foibles for a bit longer, there’s no problem with that: I’m still here for this nice mashup of Sleepy Princess in the Demon Castle meets The Devil is a Part-Timer! and even a healthy dose of Gabriel DropOut, the latter of which I haven’t engaged with much, but can see the comparison.

And unfortunately, there’s not a lot to say about this episode because it didn’t really go anywhere. However, don’t think that means it was bad: episode 3 is my favorite by far, and was a solid episode that promises a much more dynamic episode 4. My hope is we’ll get some new characters. I’d really like to see some of the character we keep seeing into the OP and ED. But mind you: there’s some good stuff here. I’m just not fully convinced that this show is going to be more than what I’ve seen thus far, though mark my words: I do like it. I just want a bit… more from it, though like I said: It’s two-cour. It kinda has to take its time otherwise Jahy will burn out, and I don’t just mean our favorite demon girl.

One thing that made this week’s episode so good was the BGM, which feels like the Wii e-Shop music in its peaceful moments. This isn’t the first time that this kind of sound design has been used, but it really stuck out to me this week, and was just Good Vibes Only as Jahy stumbled and struggled through another day in the life of a fallen demon girl. Credit goes to Kōji Fujimoto and Osamu Sasaki, who are giving me all of the late 2000s vibes that I crave. It also makes The Great Jahy an infinitely more playful episode, though like… Jahy’s doing her level best to make this series funny, and it’s starting to finally gel.

It’s still too early to tell if I really like the vibe of this series, only because I keep thinking about the fact that it’s a two-cour series. I imagine that by six episodes in, I’ll have a solid opinion on whether or not everyone’s favorite second-in-command is good or not. I think you can probably predict -fairly accurately- which way I’m already leaning. (It’s towards Jahy good, not Jahy bad, which… is always nice. I like to review things that I’ll like far more than things that feel like a struggle.) Here’s to episode 4 being another good entry to the series. Consider me… a bit of a fan.

Episode 7 - The Detective Is Already Dead

5 Anime You Must See According to Mamoru Hosoda - Interest