Episode 4 – AMAIM Warrior at the Borderline 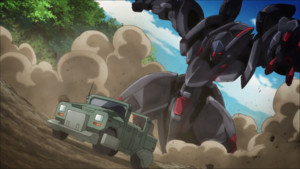 My most common complaint about AMAIM has been that it just hasn’t done anything to differentiate itself from any other mech show. Happily, today I can say that it’s finally distinguished itself. For the first time in the history of mech anime, we’ve established that a designated Good Guy group actually provide therapy for their doubtlessly traumatized teenage pilots. Now Amou hasn’t actually made it to a doctor’s office yet, but Shinji Ikari would weep at just hearing the option, and that in itself is a form of progress. If they follow through, that one decision could truly make this series a revolution in the subgenre.

Joking aside, this episode actually does a lot to address some of my concerns about AMAIM from its introductory episodes, though it’s definitely not perfect about getting there. The introduction of a new, wildcard enemy is a good choice – the seemingly rogue and autonomous “Ghost” mech makes for a strong mystery and an imposing threat that can feasibly hang above any given conflict going forward. And its introduction is fittingly brutal and action-packed, delivering without question the best bout of metal mauling so far.

On its own, Amou and Gashin’s fight against Ghost is thrilling, seeing the two slowly get in sync and pull off a win against a wild and vicious enemy on the fly. The problems come with the cliché narrative decisions surrounding that fight. Killing off Risa just to get Amou even more upset is about the most obvious and tired route you could possibly take, and it effectively destroys the one human relationship the show had actually bothered to build up so far. The only real compliment I have is that the death itself is fast and fittingly ruthless, but that’s mostly because I’m glad it didn’t waste more of my time than it absolutely needed to. Then there’s the reveal of Gashin’s backstory and his father’s death at the hands of Ghost. It’s an equally tired plot beat, but it does at least give us an immediate emotional hook for this character and his fight – it’s just that it’s delivered with the most over-the-top Inigo Montoya-esque line they could have chosen, leaving Gashin feeling like every other brooding rival in any mech or shonen action series ever. Throw in the later moment with Amou hollering his lungs out over Risa’s death and you have a ton of overwrought drama that the series just isn’t well-written or campy enough to pull off.

Thankfully, this episode does do a lot of work to recover from there. Like I said, the actual fight is pretty dang solid, which helps a good deal. But the most substantive moments come afterwards, when Amou and Gashin are left alone to clear out any sensitive evidence from the camp before catching up with the resistance. It’s here that Gashin finally starts exhibiting emotions besides Brooding and Angry as he observes Amou’s shocked depression. He doesn’t exactly help him, but that’s the point – to him, it seems like the other kid needs distance and time to think without somebody else invading his space or pressuring him to keep fighting. It’s not necessarily the “right” choice, but Gashin admits that not engaging – and thus hopefully not making things worse – is the only thing he can think of for now. It’s the most believably teenage thing he’s said the whole show, and the first time he really feels like a person.

I also like the way he reacts when Amou decides not to join the Resistance. He just quietly accepts it, without judgment or shaming, because he sees exactly why the kid wouldn’t want to continue. It’s a far cry from his behavior last episode, but it makes sense and gives him a lot more depth. And how Amou articulates why he’s leaving hits hard too. It’s not just that he’s scared of dying – though that’s part of it – it’s that he’s scared of seeing others die, of joining the resistance and making new bonds only to assuredly see those friends crushed in the fights to come. It’s a much more complicated and intense fear than just not wanting to fight or risk his life, and like Gashin’s turn it makes Amou a more nuanced character.

The story will inevitably conspire to get Amou back in that robot sooner rather than later, but if nothing else, this decision and how it’s articulated has really helped me care about these characters. That, more than anything, can go a long way in making me care about this show beyond the robots, and while there’s plenty of room to falter, I’ll happily take some progress where I can get it. AMAIM has taken one trepidatious step forward, so here’s hoping it can find its stride.

AMAIM Warrior at the Borderline is currently streaming on
Funimation.