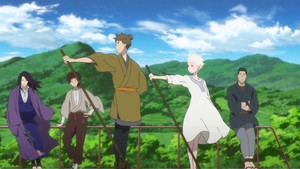 We’ve got pirates, sex workers, ninja, soldiers, and now…Joan of Arc? I was admittedly hoping that what I could see of the French in the order book would not turn out to say “La pucelle d’Orléans,” but it absolutely did, and that raises some thematic questions. Mostly that’s because The Maid of Orléans still died at the stake in 1431 in Fena’s version of the world, so commissioning the strange, clear stone in 1436 is definitely enough to raise collective eyebrows when the group discovers it. But when Fena mentions that she’s heard the name “la pucelle” before, possibly in reference to herself, and then we flash to the man who’s absolutely going to turn out to be related to her gazing at a portrait of a woman in 17th or early 18th-century dress and calling her the same thing – well, that calls into question whether or not anyone working on the show actually knows that “pucelle” is a somewhat outdated word meaning “virgin,” because it sure looks like Fena may be Joan’s descendant.

Of course, it’s unlikely that Joan was an only child, so nothing says Fena can’t be her many-times-great-niece or something. Either way, the social construct of the virgin as something pure is hard to avoid when we think of the first episode of this show. Fena, as you recall, was rescued from the brothel before her virginity could be taken – timing that takes on more significance when we add Joan of Arc to the mix. It begins to seem less like coincidental timing and more like the last possible day that Fena could be taken out of the brothel before things got screwed up in terms of whatever nebulous plan the British soldier and the priest on Goblin Island have. Had Fena lost her virginity – and however you feel about that idea, we have to work with it as it was in the 18th century: a demarcation between purity and impurity – would all of their schemes have been for naught? Certainly she would no longer have a claim on the title “la pucelle,” but then the question becomes why she’d need to be virginal in the first place. It might be too much to read the stone’s clarity (which could be framed as purity) as somehow tied up in Fena’s own so-called purity. It’s not a symbolic direction that I love, because I really think the whole emphasis on virginity and/or its loss is pretty ridiculous, but it would be within the beliefs of the time the story is set in.

It would also explain the pains taken to contrast Fena with the other European women we’ve seen in the series – the sex worker at the brothel, the pirate O’Malley, and Arya, the German woman who hits on Yukimaru this week. All of them are painted as much more sexual than Fena, with Arya shown as an actual threat to her potential relationship with Yukimaru. That first, slow-motion scene of Arya walking towards the group, her hip motions exaggerated, sets her up in direct opposition to how Fena is typically presented, and Shitan and the twins make it clear that she’s angling for Yukimaru in her bed. That’s not an assumption that actually takes anything but her appearance into account – touching him on the arm and shoulder is well within acceptable even for the time period – but that they even make it once again contrasts her with Fena and frames Fena as more innocent and “pure.”

That Fena is trying to be more than the damsel in distress is therefore something of a breath of fresh air. She knows she’s more of a burden than anything after last week’s near-disastrous trip into town, and that doesn’t sit well with her, because whatever else she is, Fena’s not interested in being passive. Getting someone to actually teach her how to use weapons is rather more difficult than saying she’s done with being the princess, possibly because no one really believes that she’s serious about it. She’s patently not good with any of the weapons she’s given, but that’s because she’s just starting to learn – it’s not Fena who keeps giving up and switching weapons and teachers, it’s the rest of them who possibly assume that she’s not as serious as she is. Shitan’s almost the only one with a leg to stand on, because really, how many arrows can he afford to lose to the sea while she’s practicing?

If Fena wants to keep getting stronger, she’s going to have to convince everyone else that she’s not willing to just stand by and be pretty and protected. That’s where the inclusion of Joan of Arc may prove to be a good thing – because after all, she didn’t just stay home on the family farm. She went out and fought for what she believed in.