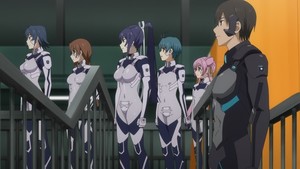 Part of me was worried about the possibility of my Muv-Luv Alternative reviews devolving into the same kind of time loop Takeru himself seems to be caught in, as the show raced along its apparent mission statement of SparkNotes-ing its source material. As I concluded last week, I’m interested in the base story here and would like to be able to comment on and evaluate that. But so much of that delivery is hamstrung by the formatting choices, and it seems we’re just going to have to live with it as the show attempts to cram 50+ hours of visual novel content into a standard TV anime length, something that has certainly never proven challenging for any other adaptations of any kind before!

It’s “fortunate,” then, that Muv-Luv is already exploring bold new side-eye-worthy story delivery choices in this fourth episode. Indeed, the aforementioned issues come together to start compounding with this one, as there are pieces of information in the story so far that Takeru is aware of, which visual novel players would also be privy to, but anime-only viewers are still waiting to be caught up on. For example, the “Royal Guard” who pop in this episode prompt Takeru to reflect on how there is an “original” Takeru who was seemingly replaced when the Takeru of this show teleported into the world. It comes off like the show going “Oh, right!” and filling us in on key details it previously forgot about in real time. It’s hard to tell, however, whether this is an established detail, as Takeru’s musings on whether his dimensional doppelgänger died before the switchover even happened sound like mere speculation at this point.

This leads into another storytelling problem later in this episode, exemplified by the twist that the Yokohama Base the characters are stationed at used to be a BETA hive itself. This turns out to be a shock to Takeru, meaning us newcomers in the audience are caught in a constant push and pull when it comes to the narrative’s details. We find ourselves wondering throughout if a revelation we’re catching is something that Takeru knew but we didn’t, or information that’s supposed to be totally new to everyone. Visual Novels can be effective at blurring the line between the POV character and the audience controlling the experience through them, but trying to adapt that for a non-interactive format without accounting for the different experience just makes the presentation of this information come off as disorienting.

The other key issue that manifests with this episode of Muv-Luv is that when the show does decide to actually slow down, its choice of what to focus on is… questionable. See, there’s actually a rather clever development earlier in this one about Takeru recalling the robot-piloting skills he inherited from his last save file and how to best impart those to the girls in order to speed up their training time—except this leads him to reminisce about his video game hobby from the regular world and suggesting that as a way for streamlining the controls. Even putting aside the suspension of disbelief required to accept that Takeru is seemingly the first person in this universe to come up with the revolutionary concept of “intuitive controls,” the execution of this segment beggars belief simply because of how much time is spent on it compared to every other part of the show so far. Huge stretches of dialogue and demonstrative visuals are allocated to the logistics of porting Virtual-On controls to military mechs, coming off distressingly close to those scenes of over-detailed indulgent game mechanic explanations I’ve come to know all too well from modern isekai. It’s especially jarring because learning anything about the other cadet characters’ personalities is still a premium request apparently; the most we get here is a brief montage when another character assures Takeru how much they all care about him. But an extended segment of Takeru laboriously explaining combos and cancels to us? Someone really spent the extra time scripting and boarding all that.

It continues to make this whole experience an exercise in frustration even as Muv-Luv dots this episode with things I genuinely like. Takeru himself continues to be a surprisingly compelling lead, not letting the extraordinary circumstances he’s been through rob him of genuine joy as he recalls good times with his classmates both in and out of this universe. And while we’ve seen that he’s certainly developed as a person, it seems there’s still room for him to grow, at least in terms of broader understanding of the world’s workings: He struggles with the petty human conflicts that persist despite the supposedly unifying threat of the BETA, and he’s been growing more aware of the unpredictable butterfly effect caused by his interferences in the timeline. The presentation of the anime still isn’t bad in spite of being a clip show what feels like 75% of the time. There are snippets of more of that sweet, sweet mecha action this week, and even during the exhausting video game controls explanation sequence, the people in charge really did take extra time animating Yuuko’s nervous habits as she pondered the possibilities.

Muv-Luv showed this week that it can settle down and focus on subjects at a pace more appropriate for serial television—it just happened that I was uninterested in said subject. It makes the narrative experience as questionable as ever, especially as it’s flippant about even giving us the relevant information to work with. If this is an adaptation that wants to interest and draw a new audience into the world of Muv-Luv, it really needs to step up enough to convince us it actually cares about that.