Home » Episode 4 – The Great Jahy Will Not Be Defeated!
Anime

Episode 4 – The Great Jahy Will Not Be Defeated! 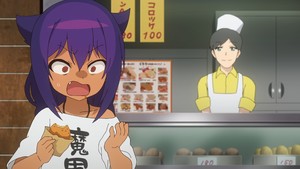 Episode 4, “Saurva Never Slips Up?” introduces the actual best character in this series, bar none. Enter Saurva, the true elite of the Dark Realm, and the wannabe #2. She’s also Jahy’s rival, even though Jahy has so many other things to worry about, like being broke.

A lot of the humor in this episode is Saurva trying to undermine all of Jahy’s efforts, but ultimately ending up spending a day in Jahy’s shoes. It’s largely because Saurva is too nice to sabotage Jahy, despite desperately craving that second-in-command seat in the Dark Realm. Honestly, this is where The Devil is a Part-Timer! vibes hit me most because Saurva is… way too cute for doing any kind of evil. She’s more suited for hustling at the izakaya than plotting Jahy’s untimely downfall. Plus, Jahy’s more than capable of causing her own downfall. Still, I too crave nikuman, which serves as Jahy’s final boss this episode. It’s a very funny bit, and further cemented Jahy as an incredibly relatable character, though she’s honestly been growing on me a lot over the past few weeks.

Also, let’s talk about the little post-credits snippet, which I’ve avoided until now because the ones we’ve gotten honestly didn’t add much to the series itself – they’re just cute little reference segments featuring the cast of characters from the source material. Today, however, we get to witness Jahy in an alternate reality where she’s still cruel, but draws manga (which gets meta because it’s, of course, The Great Jahy Will Not Be Defeated!) and like… Where The Great Jahy Will Not Make Her Deadline at? I’d love a spinoff where she bullies Druj and also barely makes her deadlines. It’s all very funny, and wrangled a few hearty chuckles out of me because even in a different reality, the brash Jahy will always be foiled by her streak of bad luck.

Episode 4 had me guffawing, not because of Jahy’s rather pitiful life, but because Jahy is just such a sweetheart. She might have once been the most rough and tumble girl in the underworld, but now she’s just a cute demon girl who pets dogs, eats bean sprouts, and sleep. A lot of the comedy also comes from the simple fact that for most of the episode, Jahy never really meets Saurva. Instead, Saurva goes about trying to ruin Jahy’s life… while Jahy takes a late afternoon/evening nap. The simple fact that this episode is structured around Saurva never meeting or seeing Jahy past a brief moment at the beginning of the show had me in stitches, and instantly made the very hapless Saurva best girl for me.

In many ways, Saurva, who is constantly juxtaposed against Jahy during episode 4, is the actual pitiful character here, and her suffering ranges from general misfortune to almost lapping up potion off the ground. She’s constantly mistaken for being a cosplayer, which is hilarious, and just… gosh, I just crave more Saurva. I really hope that she’ll be back in episode 5, though I’d like to see her as herself, not as Jahy. In fact, if the week’s episode had a noticable failing, it’d be that. Saurva is good, but she practically disappears in the back half. Less Saurva as Jahy, more Saurva and her foibles, please and thank you.

That’s it for this week y’all: Jahy is officially good, and I can no longer ignore how excited I am to watch this series every week. I’m excited enough that I’m picking up the manga so I can start adding some additional context to my reviews, because I really want to give The Great Jahy my best effort. The Magnificent Saurva has this buckwild chunni energy that has me ride or die for this series. (And Druj: I’ll never stop loving my gothic lolita turned twenty-something OL demoness. We stan a cutie.)

This was, bar none, the best episode of Jahy thus far, and while I know we’re only at the fourth episode of a two cour serires, it really was the tipping point for me. If Jahy is The Great Jahy, then I’m The Great Jahy Stan, and I’m here to shill the wonders of our fallen demoness until the final episode of this cour and beyond. Mind you, I’ve still got some concerns, but so far Jahy’s been treated as nothing but a cute character, and despite her Dark Realm outfit, she hasn’t really been sexualized in the ways I was expecting. That’s a nice surprise, and hopefully, it will be the same when I swan dive into the manga.

Come for a simple, reverse isekai slice of life comedy, stay for the antics of a twenty-something-year-old looking demoness trapped in the body of a child who’s struggling in the way of a twenty-something-year-old. It’s very good, intensely relatable, and honestly laugh out loud funny. (Also, stay for the Nintendo Wii eShop-esque music which is just an absolute banger!) It’s all good, and if this is where you want to vibe, Jahy will give you a solid twenty-four minutes of enjoyable animation each week.

My Villain Academia: Villains Aren't Born, They're Made - The ANN Aftershow